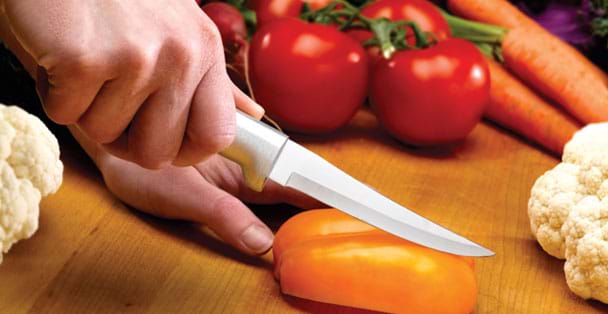 The Super Parer is the largest paring knife manufactured by Rada, and it’s one of the most useful tools you can have in your kitchen.

Featuring a 4 ?-inch blade, the Super Parer is the obvious choice when you need to cut a bigger item, such as breaking down a whole chicken or larger fruits and vegetables. This large paring knife is ideal if your are cutting up a lot of potatoes for Thanksgiving dinner.

The size of the blade and the handle are the largest of Rada’s paring knives, which results in greater comfort and versatility during usage. The stainless steel blade easily cuts through even tougher foods such as beets, while the size allows for well-controlled, graceful cuts of foods such as onions, peppers, cabbage, meats, and more! Whatever sort of meal you’re preparing, from dinners to desserts to garnishes, there’s a chance that the Super Parer will come in handy.

The Super Parer, like all Rada cutlery, is proudly made in the USA (click to see manufacturing video). Since 1948, Rada has prided itself on a superior product sold at a great value. We are also the premier source for fundraisers, who sell our cutlery to support worthy causes such as schools, charities, churches, and civic groups. Fundraising groups frequently let us know that our cutlery is of such high quality that it practically sells itself!

We rely on word of mouth to spread awareness of our products. Many say the Super Parer is the best paring knife they have ever used. Here’s what some customers have to say about the Super Parer:

“The Parer is flexible enough to skin a chicken with relative ease, but sturdy enough to dice and slice through onions, potatoes, and just about anything else thrown its way,” said one customer impressed with the Super Parer’s usefulness.

“Cannot believe the quality of this knife...especially taking in consideration of the price. Have purchased very expensive knives previously and this knife is far more superior,” said another user of the Super Parer. “Will never buy another brand again! Do yourself a favor....get this!”

“I have purchased several more expensive knifes, Swiss-made, German-made knives with glowing reviews. Each time I was disappointed with them, basically too dull. I needed something to trim chicken and nothing seemed to work well. This knife is much sharper, worked the best and was less expensive. I didn't buy this knife initially because it was less expensive and because of that I assumed it would be inferior....I was so wrong! Don't let the price fool you, it's better and it's made here in the USA!” raved another customer in a 5-star Amazon review.

The Super Parer is proudly Made in America, as are all Rada kitchen knives and utensils, and is available individually or packaged in attractive cutlery gift sets. It comes with a Lifetime Guarantee, so when you buy, you can be certain that you’ll be using it for many years to come!