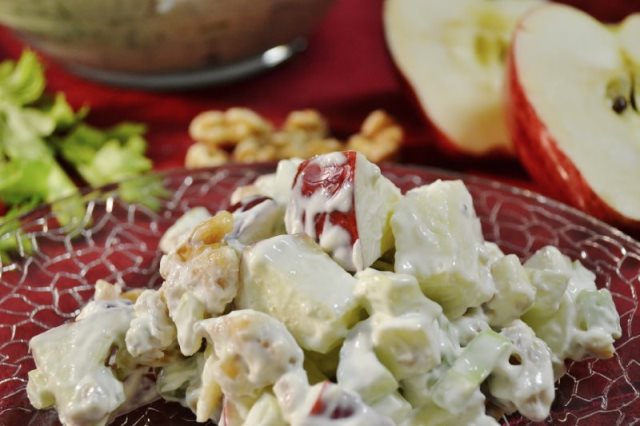 The Waldorf Salad is a classic, unforgettable recipe enjoyed by Americans since the early 1900’s.

The salad takes its name from when it was created, just before the turn of the century at the Waldorf-Astoria Hotel in New York. Originally a simple combination of chopped apples, celery and mayonnaise, this recipe was later doctored with nuts, and sometimes with marshmallows, pineapple, and dates. 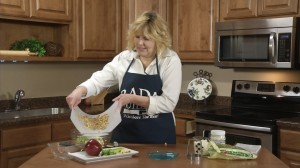 Watch Kristy Kay’s video below to follow step-by-step instructions on how to create this recipe, but for now, follow this easy how-to with photos. 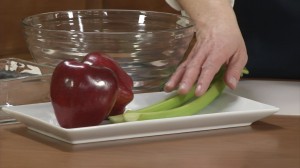 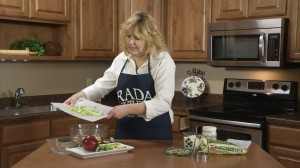 In a mixing bowl, combine apples, celery and walnuts. 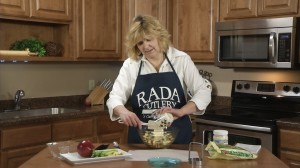 Lightly fold in mayonnaise until ingredients are coated. 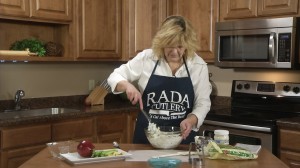 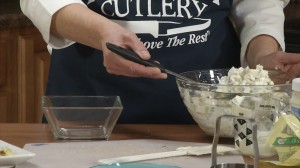 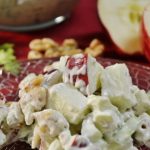 The Waldorf Salad is a classic, unforgettable recipe enjoyed by Americans since the early 1900’s. The salad takes its name from when it was created, just before the turn of the century at the Waldorf-Astoria Hotel in New York. Originally a simple combination of chopped apples, celery and mayonnaise, this recipe was later doctored with nuts, and sometimes with marshmallows, pineapple, and dates.
Prep Time10 mins
Servings: 4

The Best Knife for Cutting Potatoes! 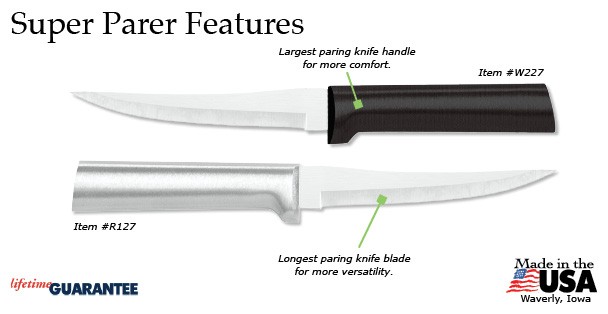 You won’t find a better way to cut an apple than Rada Cutlery’s amazing Super Parer! This stainless steel paring knife features a hand-sharpened, long paring blade for maximum usability and versatility. Use it to cut apples, potatoes, fruits and vegetables, meats, and more. It’s protected by a Lifetime Guarantee, and, like all Rada products, is proudly made in the USA!

Stop by the online Rada Kitchen Store to make the Rada Super Parer part of your kitchen collection!

2.  Carrot-Beet Salad with a Smokey Vinaigrette 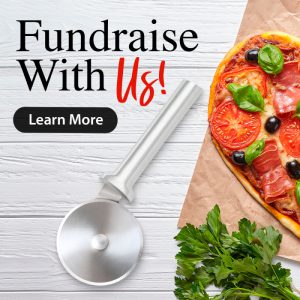 Rada Cutlery has been fundraising with nonprofit groups since 1948. Here are five reasons why Rada is your ticket to fundraising success:

1. Great Products People Want – Rada Cutlery offers cutlery, kitchen utensils, stoneware pans, cookbooks, and much more! All cutlery, utensils, and gift sets are backed by a Lifetime Guarantee, so supporters can buy and use with confidence.

2. Incredible Customer Service – Fundraising groups are known to rave about the quality of Rada’s customer service. Our friendly, knowledgeable representatives are committed to helping your fundraiser be a success!

3. Huge Profits on Sales – Rada Cutlery fundraisers give your group an incredible 40% average profit on items sold! That’s far more than most fundraisers. Your group’s efforts go further with Rada!

4. Three Lucrative Ways to Sell – A Rada fundraiser offers not one but three unique sales methods, each designed to maximize your group’s profits! Catalog sales is a tried-and-true method that allows your group to offer catalogs to friends, family, neighbors, and coworkers. Event sales feature a personal touch, taking advantage of friendly crowds and physical interaction with our stellar products. Online sales utilize the power of the Internet to allow fundraisers to make easy sales to supporters close and far. Use one, two, or all three methods to earn money for your cause!

5. American-Made Cutlery – Every Rada product is made entirely in the USA. American workers craft each item with unmatched skill, making products your group and its supporters can be proud of. Stop by our website to learn more about how our employees’ skill and dedication make Rada products the best for your fundraiser! 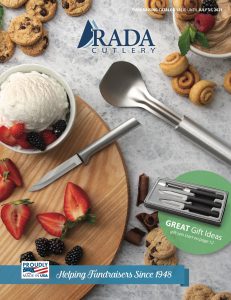 Your friends and family will love the Waldorf Salad! Try it using Kristi Kay’s video below:

Hi, Kristy in the Rada kitchen and today I am going to introduce you to our Unforgettable Cookbook. This has a 100 years of timeless American recipes, it has cute little stories about each century. It goes from 1900 to the 1990’s, there might be some recipes that you use today or you might be surprised to find some recipes that you’ve never even heard of. Each recipe has a way of how it was invented, what year, what was happening in that decade. So today I am making Waldorf Salad. This was invented at the Waldorf-Astoria Hotel in New York City around the late 1800’s early 1900’s. This is the original recipe, people have added to it like pineapple and marshmallows to jazz it up a little.

You will need 1 cup of sliced red, unpeeled apples, a cup of chopped celery, 1/2 cup chopped walnuts and 1 cup mayonnaise. First we are going to slice our apple, I am going to use the Rada Super Parer. So this recipe was invented in the early 1900’s. Back then people were pretty well-to-do. I was the Titanic era and affluent people would have large dinner parties of 12 to 18 courses. They would dine on Oysters Rockefeller and crepe Suzette’s. But most of the people lived on farms or small communities so they butchered their own cattle and they probably had chickens in the back yard for their eggs. They had to use wood or coal stoves and they probably had their own apple trees too. So you chop these into bite size pieces and you put these in your mixing bowl.

Next we will chop up the celery, remove the leafy ends, now I like to slice these down the middle, this one is a little thick so I am going to cut it three times. Back then housewives spent most of their day in the kitchen. And now I’ll put this in my mixing bowl and now I am going to use the Rada Food Chopper to cut up 1/2 cup of walnuts. This food chopper chops anything, it also good to make cut out cookies, biscuits. Alright once you have them to the desired size we’ll add this to our mixing bowl. So now I’m going to mix that together and now I am going to add a cup of mayonnaise. And you just want to gently mix that. It’s a very pretty salad and very easy and quick. This recipe will make about four servings. It’s easy and quick and you’ll find this recipe in the Unforgettable cookbook it takes you through the whole decade of the 1900’s to the 1990’s.