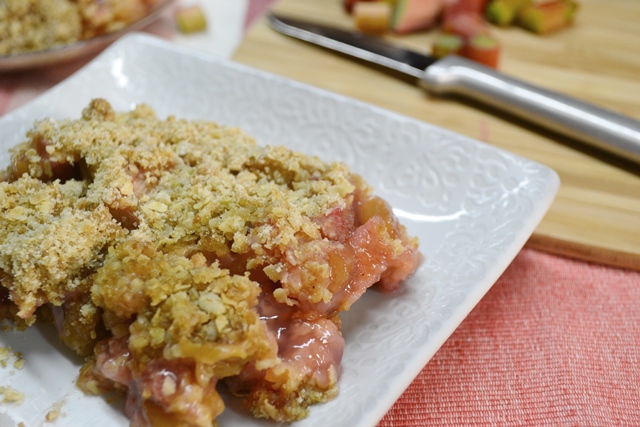 It’s that wonderful time of year again when the delicious, tangy rhubarb is ready to harvest! Rhubarb can be enjoyed by itself as a crispy treat or as a sweet delectable dessert. Desserts like rhubarb crunch, crisp, pie, and bars are all great ways to add a little sweetness to rhubarb.

Try this easy to make recipe for Rhubarb Crunch! 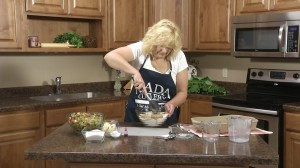 In a large bowl, stir together flour, oats, brown sugar and cinnamon. 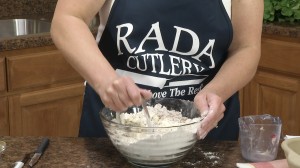 Cut in butter until mixture is crumbly. The Rada Serrated Food Choppper works like a charm to do this step. 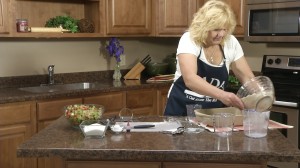 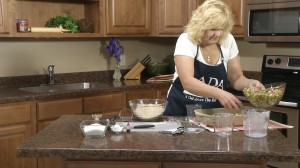 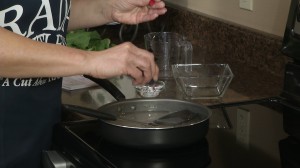 In a saucepan combine 1 1/2 cups water, the sugar and cornstarch. Bring to a boil over medium heat. Cook and stir until thickened. If desired, stir in a few drops of red food coloring. 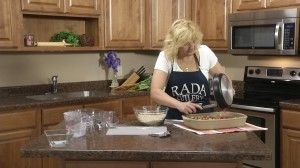 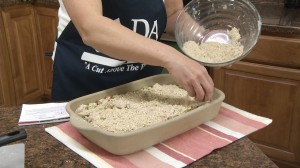 Sprinkle with remaining half of oats mixture and bake for 1 hour in a 350 degree oven. 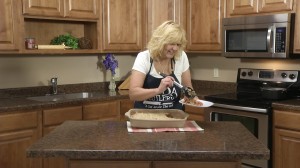 Remove from the oven and enjoy your homemade rhubarb crunch. Makes 15 to 20 servings.

If you’re a rhubarb fanatic, this is the book for you! This new cookbook will satisfy every rhubarb craving with 101 recipes for bread, muffins, main dishes, salads, soups, cookies, bars, cakes, cobblers, condiments and beverages, all using rhubarb. You’ll never be left wondering what to do with your summer rhubarb harvest again!

Do you know about Rada’s other cookbooks?

You’ll find that Rada’s Cookbooks just can’t be beat. Try them for yourself at the Rada Kitchen Store.

Do you have a fundraiser coming up? You can sell not only Rada cookbooks but all of Rada’s amazing American-made fundraising products including cutlery, kitchen utensils, quick mixes, and stoneware. Rada Cutlery Fundraisers do better because we offer an easy ordering system and a 40% profit.

Order your free catalog today and try Rada for yourself, or download it by clicking the image below! 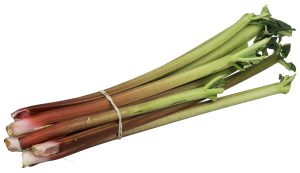 From The Writer’s Almanac:

On this date (January 11) in 1770, Benjamin Franklin introduced rhubarb to America. He was representing the American colonies as an ambassador in London, and sent a crate of rhubarb to his friend John Bartram. The plant, native to central Asia, had been introduced in Europe by traders; the rhubarb that Franklin sent to America had come to London from Siberia. Rhubarb first appeared in American seed catalogs in 1829, and soon became a popular ingredient in pies. John Bartram was also responsible for introducing kohlrabi and poinsettias to America.

Hi, Kristy in the Rada Kitchen. Today I’m making a recipe out of our rhubarb cookbook, “101 Recipes Using Rhubarb”. Not just pies and desserts, it has cookies, breads and even some main dishes that all use rhubarb.  Today I’m going to make the Rhubarb Crunch.

So I went out to my garden and I cut some fresh rhubarb for this recipe. Now you want rhubarb that’s about 12 to 24 inches and with the Rada Serrated Paring Knife, that’s the best I have found for tough woody vegetables like this. And you’re going to cut off the leaf and then to the bottom maybe a couple of inches off the bottom. And then you’ll want to wash the rhubarb after you get it cut. I want to show you how well this serrated paring knife works. I just take a bundle and it just slices right through. This knife has little tiny serrations, it’s like a little saw and it cuts through all that stringy, fibers in this rhubarb. Super easy. Alright, so I have my six cups of rhubarb. Before I started chopping this I preheated my oven to 350 degrees.

And now we’re going to mix the cup and a half of flour, the quick cooking oats, the brown sugar, the cinnamon, I’m just going to stir that together. Now to this you are going to add the butter that I had cut up into little pieces. And then I’m going to use the Rada Food Chopper. So with this food chopper I am going to cut my butter into the flour, oat mixture until it gets all crumbly. Now this is the serrated one we also have a plain edge one. This is good to do this, you could also chop nuts with it, you could cut up celery, potatoes, anything to make potato salad. So now I have all the butter and sugar all mixed in with the oats and we’re going to spread half of this mixture on the bottom of a 9 X 13” pan and I’m going to use the Rada Rectangular Baker. And I’m going to evenly spread that out and then you’re going to take you’re six cups of rhubarb and put that over the crust.

So now we are going to go to the stove top and we’re going to mix a cup and a half of water, our sugar, our cornstarch and our food coloring and that will be a sauce that we’ll pour over our rhubarb in the pan.

In a small saucepan, combine a cup and a half of water, cup and a half of sugar, and three tablespoons of cornstarch. Mix that together and put it on a medium heat and bring that to a boil. Stir the mixture until it boils and gets thick and it gets clear too. Now this is when you add a couple drops of food coloring if you want. It gives it more of a red rhubarb color. And then we are going to pour this hot mixture over our rhubarb in our pan. And then the other half of our crumb mixture we’ll sprinkle over the top.

The Rhubarb Crunch has baked in the oven for an hour and I let it cool just slightly. You can serve this warm or cold. It’s a delicious, easy dessert. Rhubarb Crunch, one of 101 recipes in our Rhubarb Cookbook. 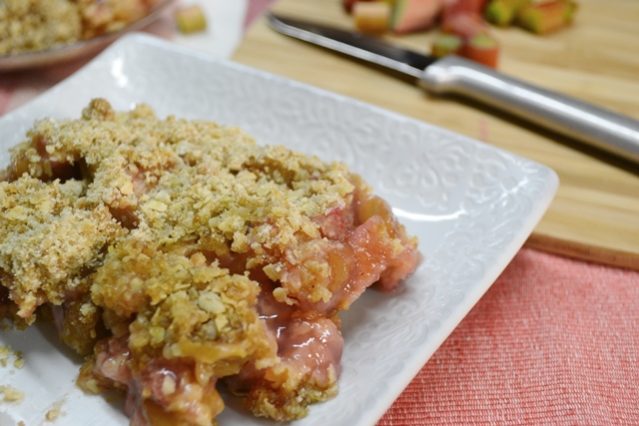