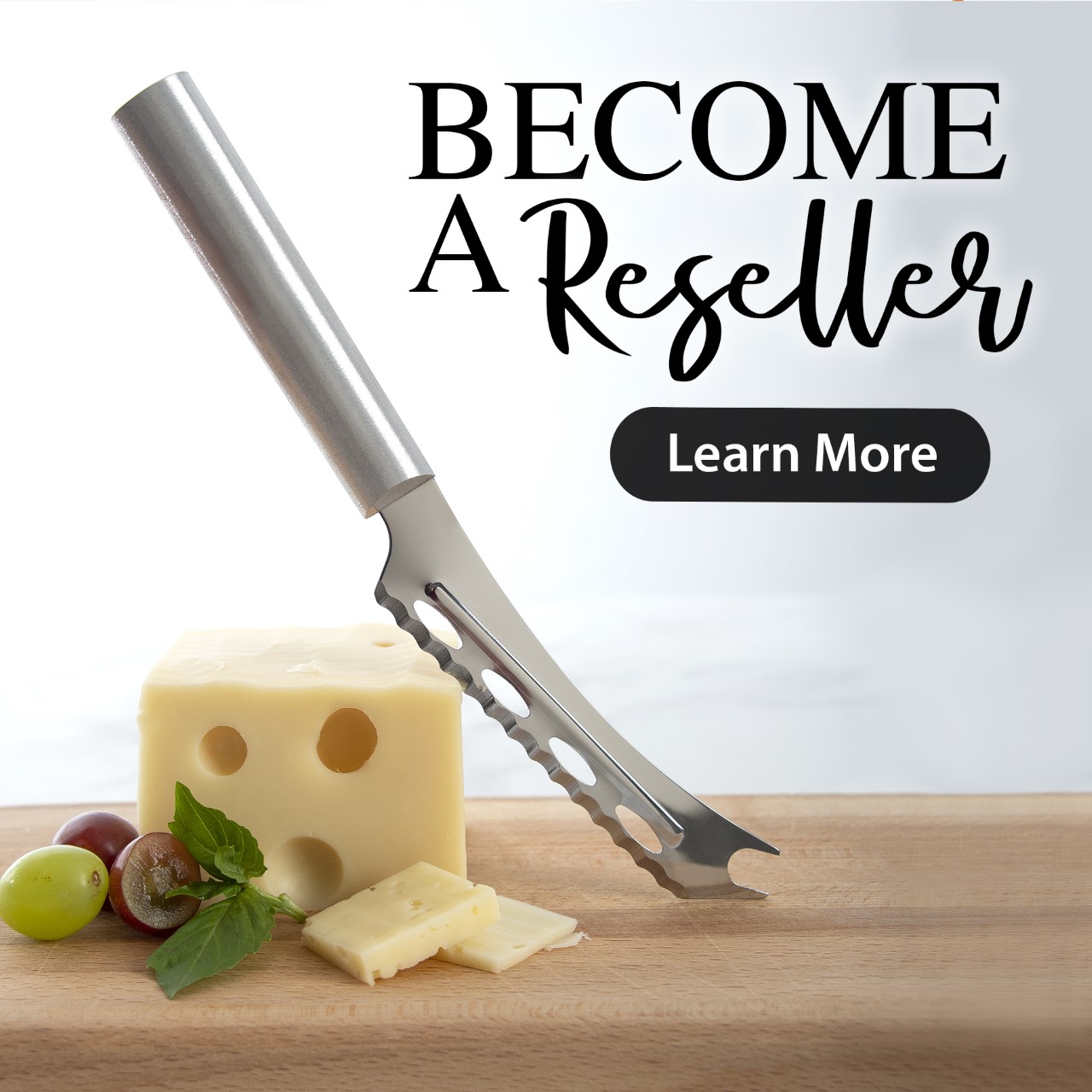 When Cheryl from Minnesota visited the Clay County Fair in 2005, she was not looking for a business opportunity. But when she had her first experience with Rada Cutlery, that’s exactly what she found.

“I was just walking up and down the aisles,” Cheryl said, “and there was a lady selling Rada. I wasn’t familiar with Rada at the time, but this man next to me was just raving about them. He started talking to me, going on and on about how wonderful they are, so much so that I had to ask him if he was working for the lady behind the counter. He said, ‘No, I just love these knives.’ So I decided to buy a few.”

Cheryl purchased six tomato slicers, one of Rada’s most popular items. But the prices were so reasonable that Cheryl wondered if they were too good to be true.

“You always go to fairs, and they try to sell you all this junk that doesn’t work,” she said.

But work they did. Cheryl gave five of the knives to family members, keeping one tomato slicer. That tomato slicer quickly became her favorite piece of cutlery, and Cheryl found herself frequently opening up the kitchen drawer just to find that one knife.

It was two years later that the most important part of Rada Cutlery’s relationship in Cheryl’s life would begin.

“My daughter-in-law asked me if they had any more of that type of knife I gave her,” Cheryl said. “I said I didn’t know, but it was my favorite knife.”

So Cheryl returned to the Clay County Fair in the fall of 2007 just to find more Rada knives. She quickly found the same seller and bought some more. Cheryl, who owns and operates Down Memory Lane, an antique sales business, suggested to the seller that she come sell Rada Cutlery at an antique show. On the way back to Minnesota, Cheryl had a revelation.

“It hit me; I could sell Rada myself at the antique shows.” Upon getting home, she promptly phoned Rada, and, by simply providing credit card and sales tax numbers, Cheryl was in the Rada business.

Cheryl has sold Rada Cutlery at antique shows for seven years now, and couldn’t be happier with the decision to do so. In addition to owning a “mom-and-pop” oil business with her husband that has since been sold, Cheryl has sold antiques at antique shows for 27 years. But selling Rada Cutlery has not only boosted Down Memory Lane’s sales, but afforded Cheryl the chance to sell knives and accessories that she is proud to stand behind.

“I love products made in the Midwest,” she says, referring to Rada’s location in Waverly, Iowa. “It’s a family-owned company, one with a lot of history. People come to my booth and tell me that their parents or grandparents used these knives for decades and just loved them. And I can tell them that Rada is 100 percent made in the USA, which everyone always likes to hear.”

The combination of old antiques and new Rada knives has been a prosperous combination for Cheryl and Down Memory Lane. In addition to her antiques, customers now see a wide array of Rada Cutlery, such as the tomato slicer that got Cheryl started, an array of paring knives, steak knife sets, and the ever-popular knife sharpener.

Though the antique shows are often huge and present a great deal of competition, Rada helps Down Memory Lane stand out. In fact, her Rada products often outsell the antiques, and can be counted on to cover expenses such as space rental, gas, and part-time helpers. It’s not unusual for her booth to attract an eyebrow-raising line.

“There have been times at shows where other vendors come to me and say, ‘Wow, you’re busy,’ even if there hasn’t been much activity at other booths,” Cheryl said of Rada Cutlery’s ability to draw customers.

“Let me tell you something about antiques,” Cheryl said. “Most of them are something you don’t need. They’re a luxury. But when you buy a Rada knife, you can use it for the rest of your life. I still have and use my first tomato slicer.”

“You know how you sometimes read that little fine print that says ‘Limited Warranties’? Those are products you don’t want to buy. But Rada has a lifetime guarantee.” A few years ago, Cheryl got the chance to demonstrate this.

“A man came to my booth with a paring knife. He said, ‘I’ve had this one so long, but it’s bent.’” Cheryl identified the knife and simply grabbed a new one from her inventory. When he asked how much it was, she replied, “It’s free. There’s a lifetime warranty, and I stand behind these products. Well, he ended up buying more on the spot!” 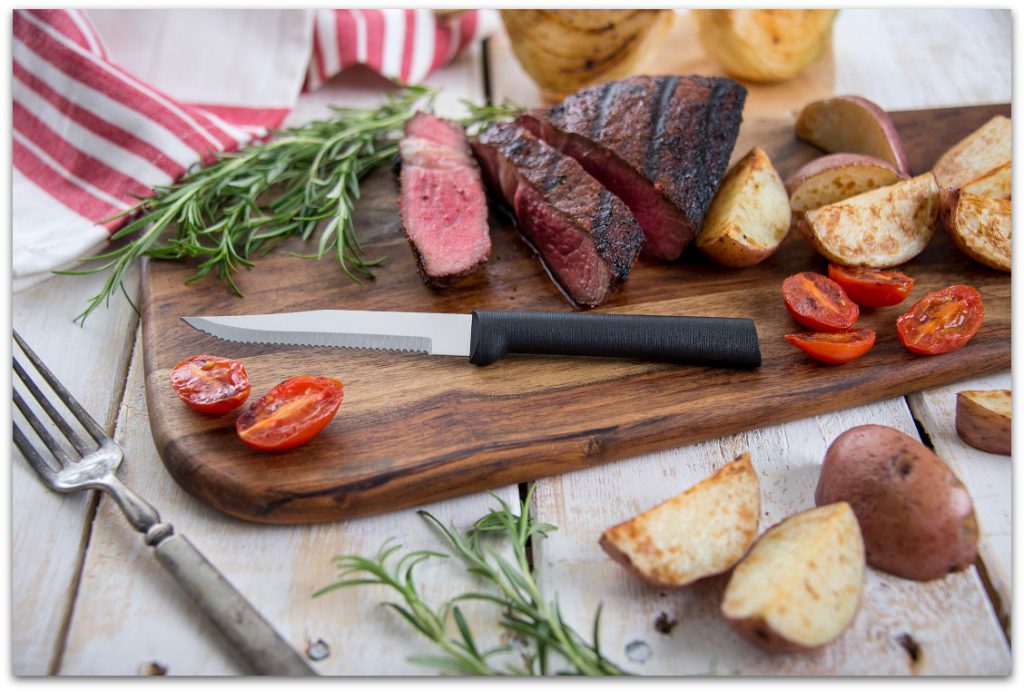 As impressed as Cheryl has been with the products, she reports that Rada’s customer service has been second-to-none.

“There are such good people at Rada, I’ve never, ever had a problem with them,” she said, adding that she considers Diane, her point of contact at the company from day one, a friend. “If I need anything, anything at all, I just call them up and they’ll say, ‘We’ll take care of it,’ and they do.”

Ultimately, it’s not just the profitability of selling Rada Cutlery that makes it worthwhile to Cheryl, but the pride that comes with knowing that she supplies people with a fine product.

“Any time you sell something, you have to believe in it before you sell it,” she said. “You can’t ever put yourself into the predicament where you’re selling something that you don’t like. Always believe in your product, like I do in Rada, and it will take care of you.” 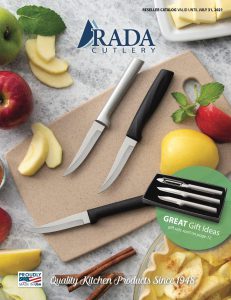 There are many advantages to selling Rada Cutlery, including:

Getting started with Rada Cutlery is quick and easy. Simply go to our Independent Sales page for all the information you’ll need, or call us at 1-800-311-9691. You can also email our customer service department.

Discover Businesses
in your area that sell
Rada products.