How to Fold Napkins | Napkin Folding Flowers and Fans 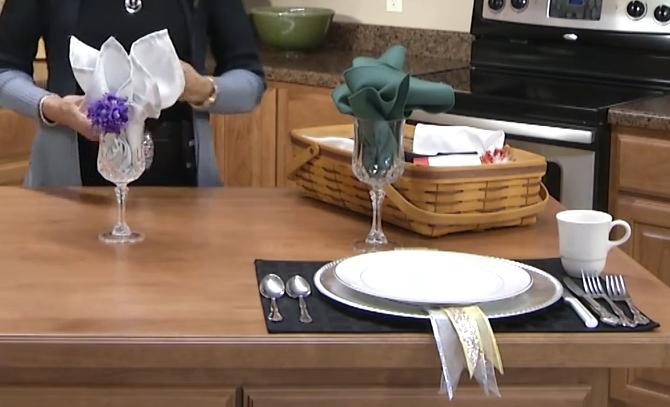 So you’re having a dinner and you want to impress your guests with an attractive table setting. But have you ever folded a napkin before?

Turn your gathering into fine dining with these napkin tutorials from Rada Cutlery and special guest Veronica. You’ll learn multiple techniques for decoratively folding napkins, and your guests will be so impressed by the appearance of your table, they won’t even care what you cooked!

In the following video, Veronica demonstrates various napkin folding techniques and how to further add pizzazz to them.  The napkin folding video includes instructions how to fold a tulip, a fan, a candle, a hat and the bird of paradise!

The impressing doesn’t have to stop at the napkins. Show off your Rada Cutlery as well! We offer knives fit for fine dining such as: 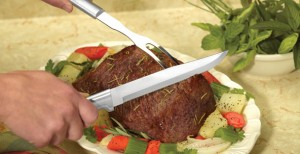 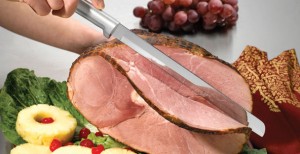 Be sure to check out the many other knives Rada makes at the Rada Kitchen Store.

Try these recipes next time you want to impress your guests with a fancy meal:

For over 65 years, Rada Cutlery has been America’s best fundraiser! Tens of thousands of nonprofit groups partner with Rada each year in order to raise the money they need. Featuring unbeatable products, peerless customer service, and three distinct sales methods, a Rada fundraiser is any group’s ticket to meeting financial goals!

Click here or on the catalog photo below to check out our fundraising catalog! 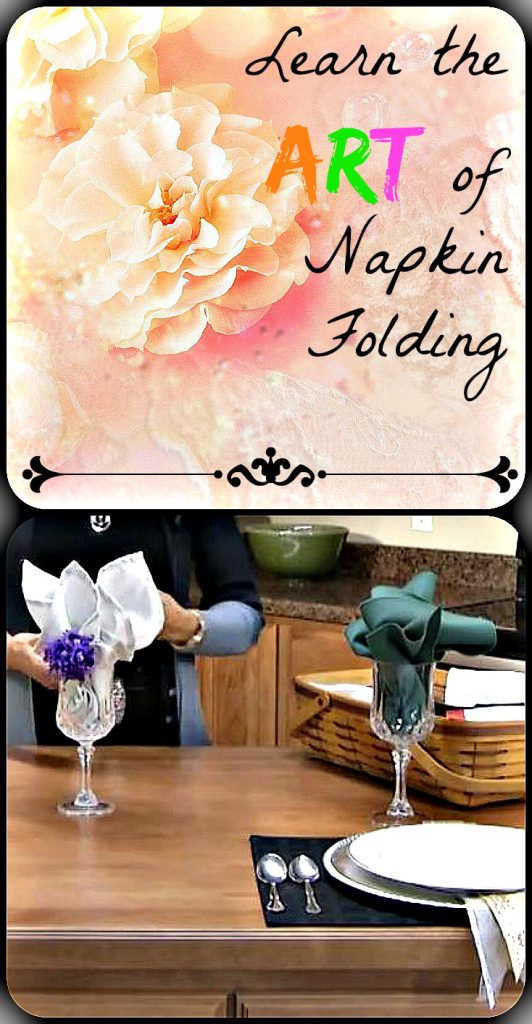 One of my favorite folds is the tulip fold. You can use it all times of year. You just take a regular square napkin, you fold it in a triangle. It’s best to use a hard top, a tabletop, when you’re learning to do this. I’ll try to use the fold up as we go along so you can see exactly how to do it. We’re going to grasp these outside corners and bring it to the center. Now you want to grasp these two outside corners and let it drop in half again. The outside flaps should be away from you. Now we’re just going to tuck it inside. That’s what holds your fold together. And you have your tulip. I like to put it in the center of the plate if I have a preset plate for my dining experience.

If you have a lot of colored napkins, it’s good to do a tulip fold and it will look like a flower garden. If it’s a Christmas season, you can make the tulip fold, but you can tuck any little arrangement you have around the house or purchase these for almost nothing. It really decorates your table and your napkin all in one.

Next, I would like to demonstrate the fan fold. This too is beautiful and can be used for many, many occasions. What we’re going to do is take a napkin and fold it in half. Then we’re going to pinch pleat it to the end. We have to have that little unpleated stand to hold our napkin up. I’m going to leave a tab about this size, because then we’re going to take the napkin and we’re going to fold it in half, making sure the fold here is away from you, because you’re going to tuck your fold into it because that will make the stand. I will hold it up as soon as I get that tucked in. It almost looks like a ship. You can fold these ahead and put them on your linen closet shelf, and when you’re ready to set your table, they’re ready to go. So we’ll pretend now we’re ready to set the table and you’re going to let loose of your stand and there you have your fan fold. I’ll show you how to vary that.

If you wanted to, you could pinch pleat that way to the end. And you have a favorite little decoration you’ll want to use or a napkin ring, just slide that on, and thus we have the pinwheel. Another variation you might want to use is to put it in a glass. I do this a lot. With a napkin, you can create any season of the year you want. In the summer I especially like to use this because I put fresh flowers in here and your table is absolutely gorgeous. On the fan fold, when we fold it clear to the end, if you have some napkin rings you don’t want on the plate, tuck it in the glass and expose your napkin ring. It makes a beautiful table.

Our next fold is the candle fold. We take the square napkin and we fold it in a triangle. And what we’re going to do then is make a cuff and this cuff can be as wide or narrow as what you want your finished product to be. I have mine at a little over an inch, an inch and a half. And you’re going to lay that down on your hard surface and you’ll have that cuff away from you. Put your finger there and then start rolling it. Every once in a while, I find that if you tap that bottom, you want a flat bottom, otherwise it won’t stand up. Just keep rolling and when you get almost to the end, leave that tab, because we’ll take that tab and tuck it in the cuff. That’s what holds your napkin fold together. So when you get ready to set your table, just set your candle down and there you have your candle fold.

Again, I like to take a wine glass, a coffee cup or whatever you have because I like the height and the way it looks on the table. If you have napkin rings, you can put them in there and it’s a great way to use those napkin rings. You never ever make a mistake in napkin folding. You just come up with a new fold.

I think I made this up, but we’re going to pretend you’re having company and you haven’t folded any napkins or have starch napkins. Take this soft napkin and find the center, pull it through your fingers and depending on the depth of dish you’re setting it in, just tuck it in, and it makes a flare. People will think you spent hours making this napkin, and don’t tell them that you just flared it. At holiday time, take a square napkin and do exactly the same thing, but the reason I wanted to show this to you is to use anything around your house to make a table setting. Have fun doing that.

If you’re having a lot of company and a buffet and no time to set your table, I call this the rollup and you can use it for all seasons of the year. What you do is place your silverware in the middle and all you do is roll it up and roll tight. Then tie it with your favorite color and you have a beautiful buffet. You’ll have one less thing to pick up. I like to use this at graduation time, and you have this whole tray of napkins and ribbons, and everyone gets a diploma. This works great to roll up your napkins with the silverware inside. You can use this with paper napkins as well.

The next one is a made-up fold that can used for all seasons. You take a napkin and fold it in fourths. You’ll take your finger at this point and make a funnel out of it. If you were a cake decorator, you’d have the frosting coming out here, but what I found that I could do is grasp this end where I’ve joined it and thus you have a little hat. These are so cute for children’s parties. Now remember you’ve folded this in fourths and what we’ll do is make this funnel just like so. This is a witch’s hat, use it at Halloween, but you can use it at Christmas and have elf hats, and at St. Patrick’s Day have green hats.

The next one we’re going to do is the bird of paradise. We fold the napkin in half and then in quarters. When you lay it down, keep the open ends down. We’ll bring these open ends to the center like this. Bring those corners both down. It should look like this, and then what I like to tell people is put these flaps down and make them kiss. Then grasp it by the back like this. When you get ready to set your table, you should have five points for the bird of paradise. You just pull them up like so and you place them on your dinner plate. Some like to have an angle, some look straight ahead. I like to take a glass and make a different look for it. It’s very showy when you have your whole table set with them.

Now we’re going to pretend you’ve had so much fun with your napkin folding, and you’re just going to have a few ladies over for lunch, but you want them to feel really good. Well I’ve got a lot of these little gift bags and you can get them for almost nothing. This one says, “Did anyone tell you today that you’re terrific?” So I like to use this for my centerpiece. Just use this for your table decoration and your guests will feel so good about that. Happy folding.