Interested in a quick and easy breakfast treat? Try these Mini Bacon & Egg Quiches. This recipe comes from our cookbook Party Snacks to Share. This book is full of tasty little appetizers for any office, classroom, or family party. Try these at a breakfast party some time! 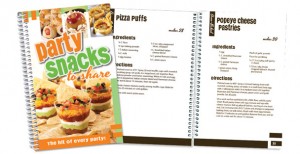 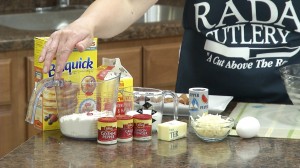 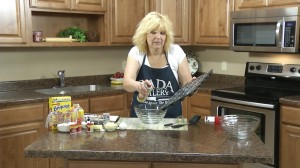 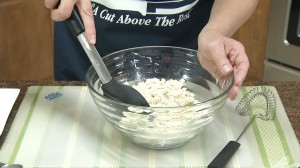 In a small bowl, stir together baking mix and butter. Next, add 2 tablespoons of hot water. Stir until a soft dough forms. 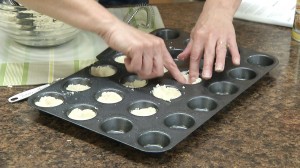 Press a rounded spoonful of dough on the bottom and up side of each muffin cup. 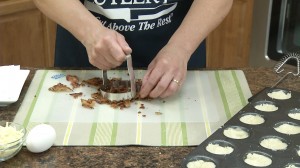 Read on to learn a quick bacon-making tip! 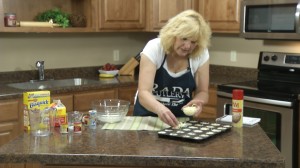 In another small bowl, whisk together half and half and egg until well blended. You might want to try the Rada Handi-Stir for this step.

Then toss in seasonings, mixing evenly. Transfer about 1 1/2 teaspoons of this mixture into each muffin cup. Sprinkle Swiss cheese evenly over the tops. 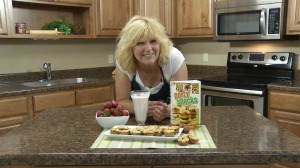 Bake for 20 minutes or until edges are golden and centers are set.

See the step by instructions for the Mini Bacon and Egg Quiches in the video box further below. 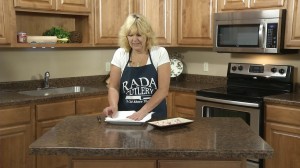 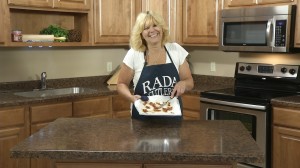 Set in the microwave on paper towels for about 2-3 minutes on high  or until crisp. You may want to put in for 5 minutes depending on how thick the bacon is.  (See the Microwave Bacon video below.) 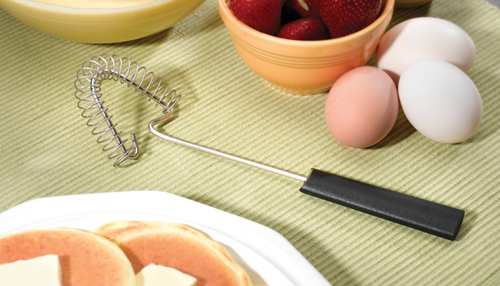 The Rada Handi-Stir is a unique tool. It’s great for anything you might use a whisk for, such as whisking eggs or egg whites. The angle of this tool is what makes it so useful. You’re able to reach deeper into the corners of your bowl this way. Also, the food won’t stick.

You can find the Handi-Stir at the Rada Kitchen Store!

Tips from the Rada Kitchen

Here are some exclusive tips from Kristi in the Rada Kitchen for making Bacon & Egg Quiches as well as a tip for cooking bacon. Take a look!

Hi, Kristi at the Rada kitchen. Today I’m making a recipe out of our”Party Snacks to Share” cookbook. These are all cute little party snacks; unbaked, baked ones, crispy ones, sweet ones. Quite a mixture of recipes that your party-goers will enjoy. Today I’m going to make mini bacon and cheese quiches.   The ingredients you will need to make the mini quiches are 1 1/4 cup baking mix, 1/2 cup of half-and-half, 1/4 teaspoon garlic salt, 1/4 teaspoon onion salt, 1/4 teaspoon black pepper, 1/4 teaspoon cayenne pepper, 1/4 cup softened butter, 1/2 cup swiss cheese, 1 egg, and 6 strips of bacon that I just made in my skillet that I will crumble when it cools.   The first thing you’ll want to do is spray a 24 mini muffin pan with cooking spray, generously. You’ll set that aside. In a small bowl we’re going to stir together the baking mix with 1 1/4 cup, and the 1/4 cup butter. To the butter and biscuit mix, I’m going to add  about 2 tablespoons of hot water. You’ll mix it until it forms a soft dough.   Then you’ll take a rounded teaspoon of this dough and put it in the mini muffin pan. Then push down the bottom and up the sides. These are great little snacks for a brunch, wedding shower, or bridal shower lunch. You can make them for your mom for Mother’s Day.

I have all of my dough placed in the mini muffin pan. Now I’m going to crumble the bacon. I’m going to use the Rada food chopper. This is the serrated food chopper. The little teeth cut right through that. Now we’re going to sprinkle our bacon crumbs evenly into each little muffin.

Now we’re going to add the half-and-half and 1 egg to a bowl. With the Rada handy-stirrer I’m going to whisk that together. To that mixture we’ll ad a 1/4 teaspoon of the onion powder, cayenne pepper, garlic salt, and regular black pepper and you’ll whisk that together.   Once you have that all mixed together, you’ll add a teaspoon and a half to each mini quiche. Once you have your egg mixture evenly distributed, you’ll take your Swiss cheese and sprinkle it over the top. You’ll want to preheat your oven to 375 degrees (fahrenheit) and you’ll put this in for 20 minutes or until the edges are brown.

Here’s our mini bacon and egg quiches that we made from the “Party Snacks to Share” cookbook, which has over 100 more cute little party snacks to share with friends and family. We’re serving it with the Floridian smoothie that we made with our key-lime dip. You can find more of those recipes at www.RadaQuickMixRecipes.com

Hi, Kristi at the Rada kitchen, and I’ve just found a neat way to make bacon really fast. Maybe you need it for a salad, or you want a piece of bacon on your sandwich at work. All you need is a couple layers of paper towel, and you lay that out on a microwave safe plate. Just make a layer of bacon on the paper towels.

So we’re going to put this in the microwave. This is really thin sliced bacon, so about two and a half, three minutes, thicker bacon you might have to go as long as five minutes.

So our bacon is done that we made in the microwave, and I’m going to use this handy Rada Microwave Mit to remove it from the microwave. It’s a real handy little oven mit. It fits your thumb and your fingers so you can easily grasp that hot plate. And there’s crispy microwave bacon in minutes.