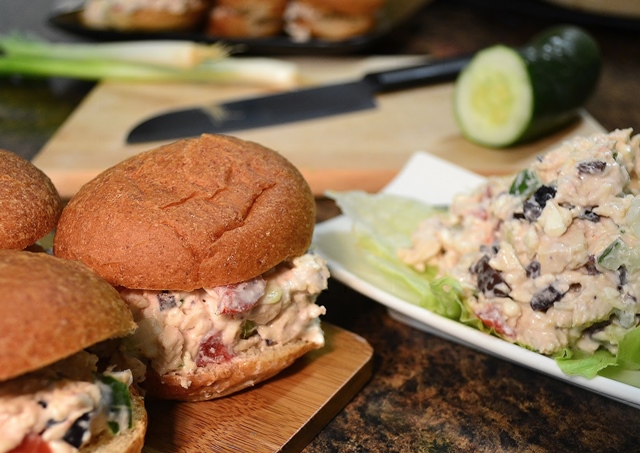 Shake up your lunch with the taste of Greece! This Mediterranean Chicken Salad recipe makes a great, flavorful meal when served in a sandwich. Bring it to work tomorrow for lunch–you’ll make everyone jealous!

*Try Boiling your Chicken – it’s so easy! Check out the steps below this recipe guide. 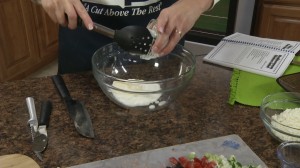 In a medium bowl, combine yogurt and mayonnaise, stirring until smooth. 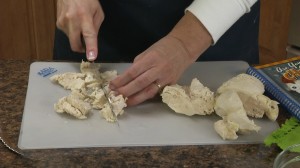 Chop up your boiled chicken. 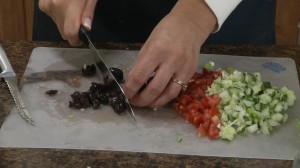 Then chop up all veggies. 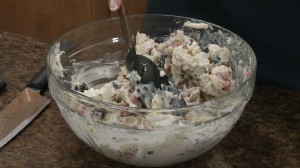 Combine all into the yogurt and mayonnaise mixture. Toss until well blended. 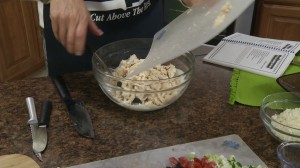 Throw in some feta cheese. 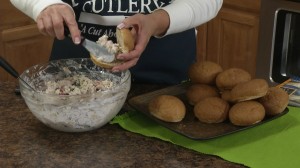 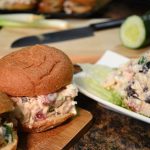 Shake up your lunch with the taste of Greece! This Mediterranean Chicken Salad recipe makes a great, flavorful meal when served in a sandwich. Bring it to work tomorrow for lunch–you’ll make everyone jealous! 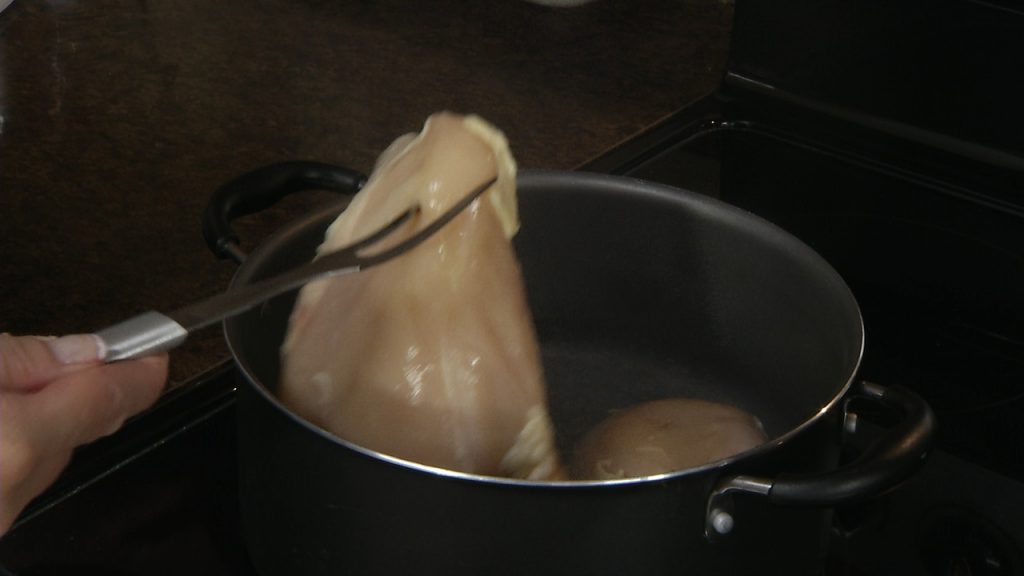 Boiling chicken is perhaps the easiest way to cook chicken. It’s great way prepare chicken for recipes like the Mediterranean Chicken Salad, because of all the extra flavors being added in the recipe. It’s also great for any kind of chicken casserole, soup, or dip. 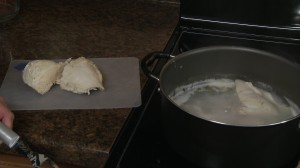 To boil a chicken breast, place three cups of water into a large pot. Bring the water to a boil over medium high heat. 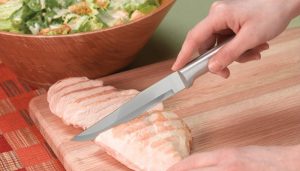 When it’s boiling, add 2-3 chicken breasts. Cook for 10-15 minutes then make sure it’s cooked all the way through. Use the water for chicken broth. Watch the video for step-by-step instructions for boiling chicken further below.

No Kitchen is Complete 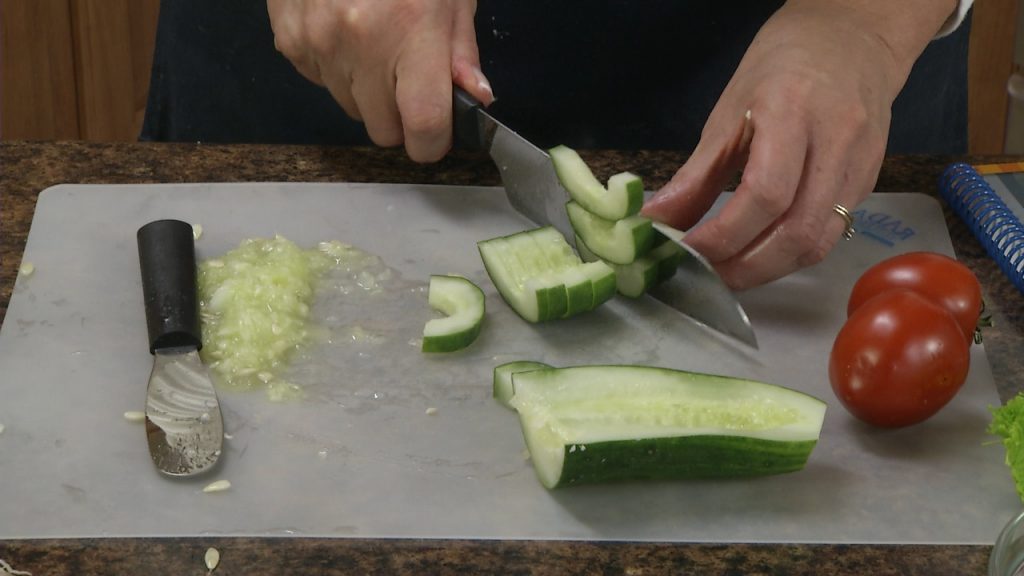 If you’re planning to make this recipe, or any recipe, you’ll want the best kitchen tools to do so. And the best is Rada Cutlery. Rada Cutlery has been manufacturing kitchen knives and utensils, all 100% American Made from raw materials to construction, since 1948. Our knives have been loved by families for generations, helped many new brides start their kitchen collection, aided thousands of fundraisers every year in reaching their goals with a 40% profit, and helped countless resellers start their own home business.

Rada’s products are one-of-a-kind and cannot be duplicated by any store brand. Your kitchen deserves the quality that Rada can give it. Visit RadaCutlery.com to learn more about our unique products that also include cookbooks, and quick mixes. Also learn about fundraising opportunities and about reselling Rada. 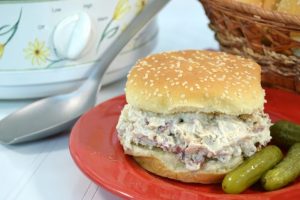 You don’t want to miss this outrageous chicken recipe! Slow cooked to perfection, these bacon ranch chicken sandwiches are so good you won’t want to stop at just one!

For over 65 years, Rada Cutlery has been America’s favorite fundraiser! Tens of thousands of nonprofit groups partner with Rada each year in order to meet and exceed their financial goals. Featuring amazing products, unbeatable customer service, and three effective sales methods, a Rada fundraiser is any group’s ticket to a successful fundraiser! 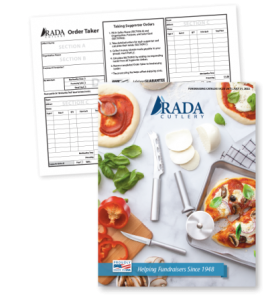 Check out this video for step by step instructions on how to boil chicken.

How to Boil Chicken Video Transcript:

Hi, Kristi in the Rada Kitchen and today I’d like to show you how to boil chicken. Now boiling chicken is the quickest way to cook chicken, but it’s really bland and doesn’t taste very good. But it’s the best chicken for salad or soups. So you’ll need a large pot and three cups of water. Bring that to a boil over medium high heat.

Once it comes to a boil, add two to three chicken breasts. Keep the water hot but watch it so it doesn’t boil over. Cook this for 10-15 minutes and we’ll check to see if it’s done.

So this chicken has been cooking for 15 minutes. Now I’m just going to cut it in half. Make sure it’s cooked all the way through, so it’s not pink in the middle. Now you can shred it or chop it for salads or soups. And you can use the liquid in place of chicken broth. Check out my recipe for Meditteranaean Chicken Salad.

End of How to Boil Chicken Video Transcript.

Hi, Kristy in the Rada Kitchen, and today I would like to share a recipe for Mediterranean Chicken Salad. This is one of the recipes in our cookbook titled “Are you Chicken in the Kitchen?” This cookbook has 112 recipes that use skinless, boneless chicken breasts. Really easy–everything from cashew chicken to chicken tortilla soup.

So first you’ll need 2-3 boneless chicken breast halves. I’m going to dice these up, I boiled these. I have another video where I showed how to boil chicken. So with the Rada Cook’s Knife, I’m just going to go in and dice up the chicken. This cook’s knife is like a French Chef knife, but it’s smaller so it’s not as intimidating. Once you have the chicken breast diced, we’re going to chop up some vegetables. You need a 1/4 cup cucumber that’s seeded, so I’m going to use about half and you want to chop that. So to seed it, I’m going to cut it in half, and with the Rada Party Spreader, scrape out the seeds. It does a really good job. Then we’ll chop that up.

Then you need about a tablespoon of green onion which I’m going to guess is one onion. Then you’ll need two plum tomatoes and you’ll want to seed those too and dice them. When I cut tomatoes, I only use the Rada Tomato Slicer. Then you need a 1/4 cup of olives that are pitted and chopped. We’re going back to the Cook’s Knife to cut these up too.

So set this aside and in a medium bowl, combine a 1/2 cup of plain yogurt and a 1/4 cup mayonnaise, stir those together until it’s smooth. Now we’re going to stir in our diced chicken. See how this Rada Cutting Board bends and flexes so you can use it like a funnel to get your chopped food, vegetables into your bowl?

Now add the vegetables. To me, the best part is the half cup of feta cheese. Now this is ready to serve immediately. I’m going to serve on these little cocktail buns. I’m going to use the Rada 6 inch serrated bread knife. It slices through those really easy. And that’s Mediterranean Chicken Salad. Just one of the 112 recipes in “Are You Chicken in the Kitchen?”