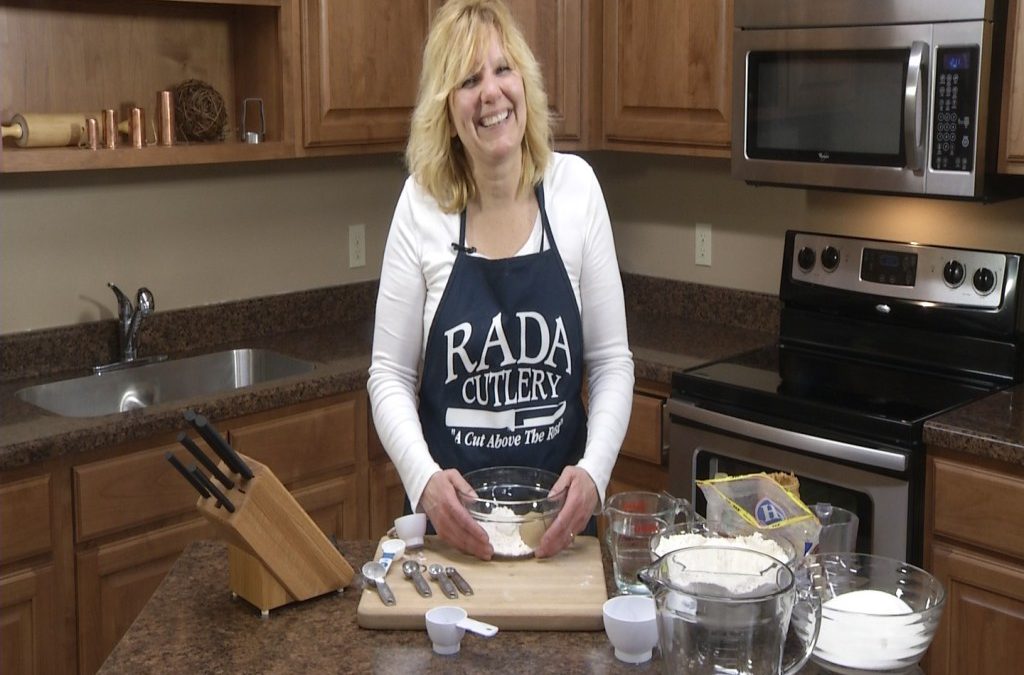 In many cases, properly measuring out ingredients can make or break the recipe you are trying to make! We decided to make it easier on you, so this post is full of tips on how to properly measure various types of ingredient out while cooking and baking. The instructions are below and you can check out the video at the end as well. Also, see the bottom of the post for how you can better your kitchen with various helpful Rada Cutlery gadgets and gizmos to help you make the kitchen fun!

How to Measure out Ingredients in the Kitchen 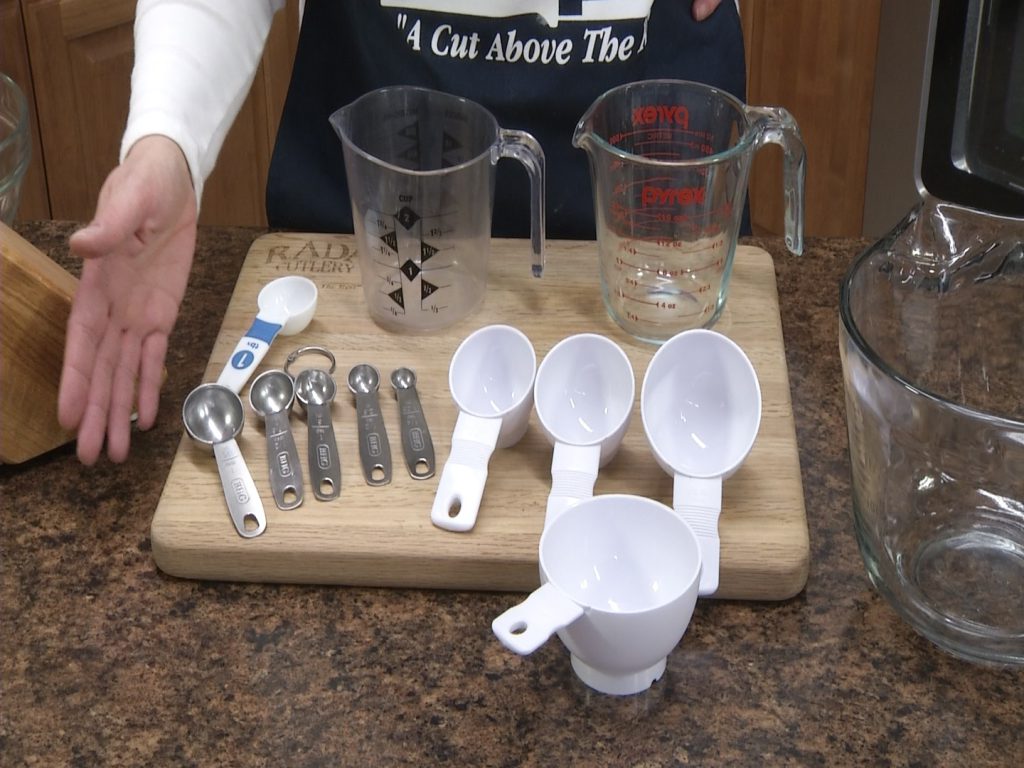 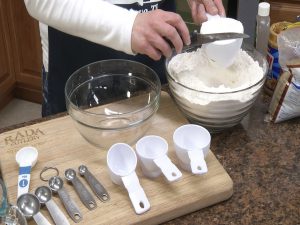 Flour can be a very finicky ingredient to work with. It is usually a good idea to keep it pretty exact! Grab the dry measuring cup and get a heaping amount of it. Now take a knife and swipe the excess flour back into the flour container, NOT the bowl you’re adding it to. If you need small amount, the measuring spoons work the same way, it is just a smaller amount. 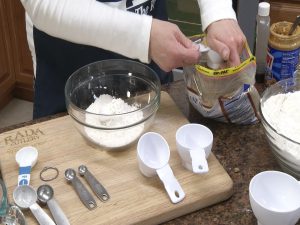 There are three different types of sugar; granulated/white, brown, and powdered, and measuring them all works slightly different ways. 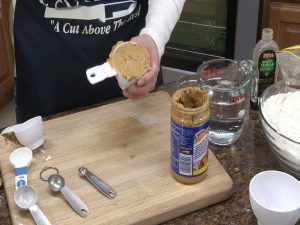 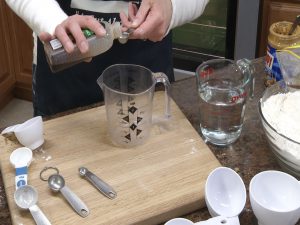 Measuring liquids is probably the easiest task, but it can also be the most messy! When you need large ingredients, use the clear measuring cup and get as close to exact as possible with your measurement, so watch the tines on the side carefully! With some amounts of liquid, like vanilla, use the measuring spoons. This will mean you need to measure out exactly the amount that is in the spoon, so pour it out over a separate bowl than your main mixing bowl so you don’t add too much liquid to your recipe!

Rada Cutlery is most known for our kitchen knives, but that isn’t all we sell. There are plenty of utensils that can help improve the quality of your kitchen and your cooking lifestyle. 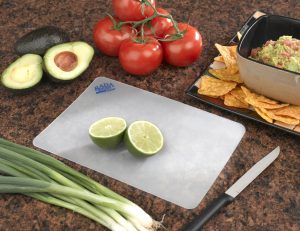 This is a super flexible cutting board that makes pouring and storing quite easy. 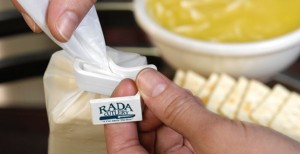 The little plastic clips are so convenient at keeping your products fresher, longer. 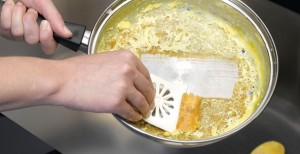 This plastic pan scraper will help you get gunk off of your pots and pans, and not ruin them, either.

All of the products can be purchased on our online Rada Kitchen Store.

How do you measure up?

Check out the video with Kristy Kay below. If you still have any questions or concerns, leave us a message in the comment box!

Hi, Kristy in the Rada Kitchen and I was just gonna give you a little lesson on how to measure ingredients in the kitchen, now cooking is a science so its really good to have your ingredients exactly measured out. I still always go back and measure everything. So its something good to know.

So first we’ll go through the basic tools available. So first we have measuring spoons. They’re either available in metal or plastic. I like the metal better, they tend to last forever. He plastic ones tend to rub off as you can see the tablespoon sign is starting to wear off. The metals ones all came on this ring, so it is handy to keep them all in one place. They have a tablespoon, half tablespoon, teaspoon, half teaspoon, fourth teaspoon, and some even have an eighth of a teaspoon.  Now these would be for liquids, or dry ingredients.

And then we have the measuring cups. Now these would be for dry ingredients. These too came on a ring. These are plastic; you can also buy these in metal which will give you longer lasting use. These usually come in a fourth of a cup, a third of a cup, a half of ta cup, and one cup.

Now for liquids you need a container like this. It has a pouring spout on it, either plastic or glass. And it has all the measurements, it will even include ounces, cups, some will even include milliliters. They have the measuring and usually they have head space because you can put these in the microwave to heat stuff. Good thing about the glass is that it won’t scorch; these plastic ones do tend to scorch when you put hot liquid in them

When you have these big pitchers that go up to like 8 cups, 2 quarts, some are 1 quart. Again, some are glass; they have head space you can microwave in these. You can even bake in these; I’ve actually made a cake in one of these before to give it that shape.

And so now I’d like to show you the best way to measure things. The first ingredient I’m going to show is that is probably the most picky when you’re making breads or cakes is flour. So of course you want to use the dry measuring cup. So just in the flour until it is heaping over. Then you just take a knife and level it off, know don’t level it over the bowl you’re mixing in because then you’ll have excess flour. So there’s how you level flour then you just put it in your mixing bowl.

Now if you just needed a tablespoon, you’ll do the same thing, until it’s nice and level like that over the flour, not in your pan or mixing bowl. And sugar is a little bit easier, again you want to use your dry measuring cup and what I do is I just shake it or you could use your knife again but it levels out pretty good and then you can add it to you ingredients. And let’s say you needed a teaspoon of sugar and you can just shake it like that.

That was granulated sugar, brown sugar, 99% of recipes ask for packed sugar. So what that means is that when you put it in you’re dry measuring cup again, you’re actually going to push with your hand until it is finally packed. And if you see my bowl here, it actually holds that shape. If you needed a teaspoon or a half a teaspoon, you wanna do the same thing; just push it in until it is well packed and even and it is ready to put into your ingredient bowl.

Now liquids, you want to fill it to the line, here’s the two cup line and you want to put it on a flat surface and then you can kind of eye where that level of water or milk is. So if you want to take a little out if it’s too much and that’s where this handy little spout comes in, you can level it out that way.

Now if you are doing a small amount, like vanilla, then over a separate container, just fill it to that line. Now sticky things like peanut butter, chutney, you’ll want to use the dry measuring, but it is really sticky so what I like to do is put a little bit of oil in your measuring cup and then push that ingredient so you get all the air bubbles out. You want to push to the bottom. And this is the dry measuring cup and then just make sure you smooth it all out, if you want to take a knife you can do that, too. And then it will come out easier with that oils in there and you can add it to your bowl.

So that’s the basics of measuring ingredients for a recipe. Remember, cooking is a science so its good to have the correct measurements. If I left anything, leave a comment and I will respond to you, thanks for watching!