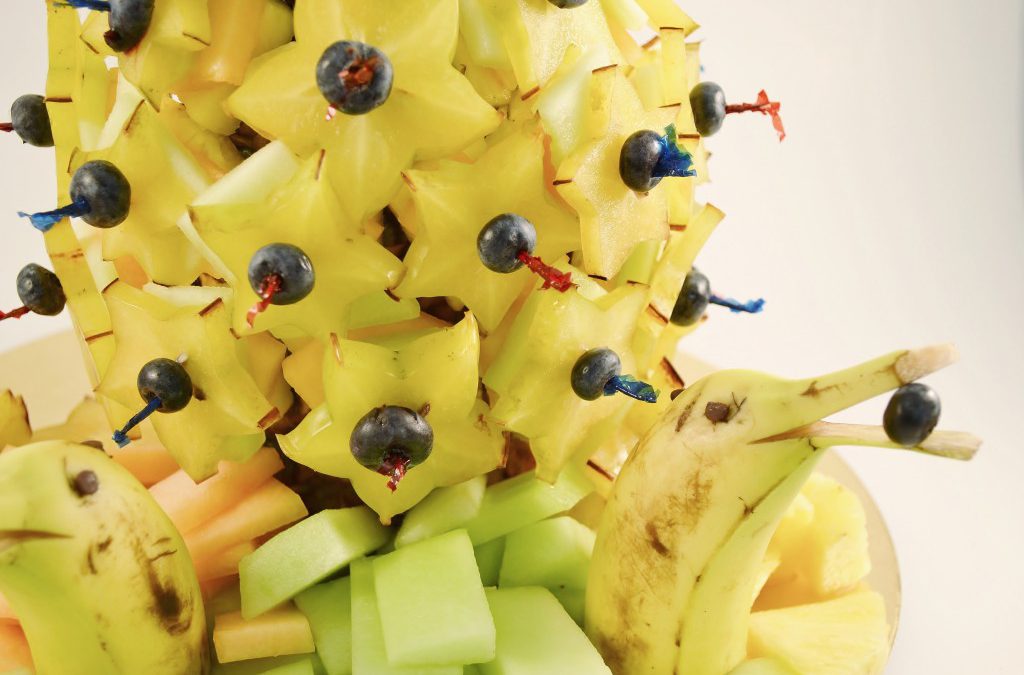 Looking for a display that’s as tasty as it is beautiful? Then look no further than this marvelous edible fruit arrangement! The vibrant colors from delicious fruits come together for a centerpiece you’ll want to photograph before you eat! 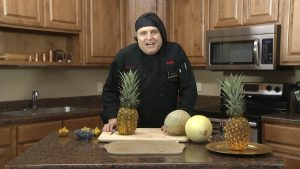 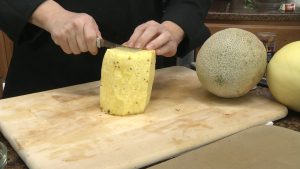 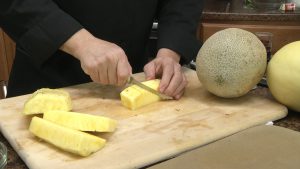 Peel and cut cantaloupe into 1/8 to 1/4″ slices similar to pineapple. Remove the seeds. 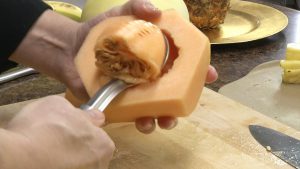 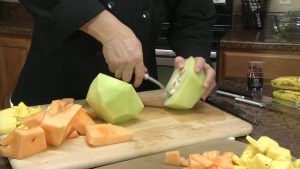 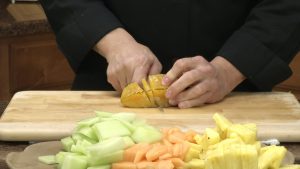 Using toothpicks, create a skewer by placing outward pieces on first and working backwards. Spear the backward end into the display pineapple. We went in the following order: blueberry, starfruit, melons, pineapple.

Take desired number of bananas and carefully cut into the stem. Cut a small X on each side of the banana near the stem. Place mini chocolate chips in the X spots to form eyes and place a blueberry in-between the cut stem to make a ball, giving you an adorable banana dolphin. 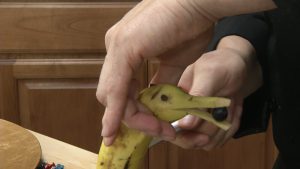 Enjoy with both your eyes and your taste buds! 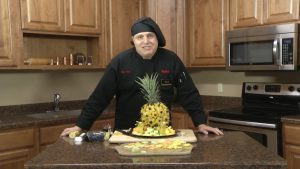 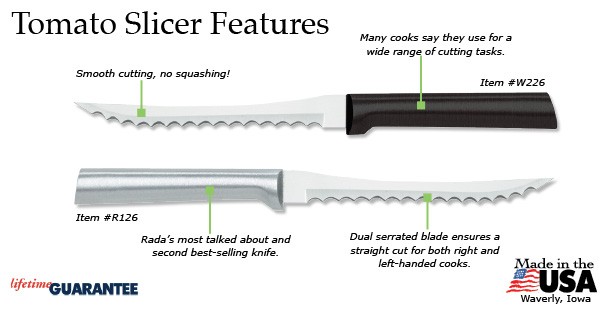 The Rada Tomato Slicer isn’t just your best bet for getting perfect cuts of tomatoes, as it works equally well with all kinds of fruit! Whether you’re cutting a honeydew, a pineapple, or a ripe tomato, this steel knife’s dual-serrated blade ensures a straight, smooth cut with no squashing. It’s protected by a Lifetime Guarantee, and, like all Rada Cutlery products, it’s entirely made in the USA! 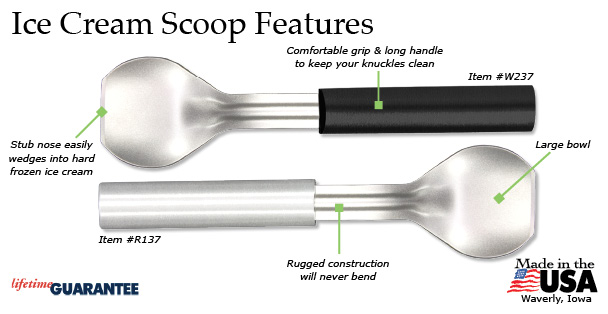 Don’t let the name fool you, because the Rada Ice Cream Scoop knows more than one trick! Use it not only to easily scoop even hard ice cream, but to remove seeds from large fruits such as cantaloupe and honeydew. It’s made in the USA, and will be with you forever as it comes with a Lifetime Guarantee!

Stop by the Rada Kitchen Store to order your own Rada Ice Cream Scoop!

You won’t find a better way to fundraise than with a Rada Cutlery fundraiser! Every year sees tens of thousands of groups meet and exceed their financial goals by fundraising with Rada, putting countless millions towards worthy causes. Churches, schools, civic organizations, sports teams, and more count on Rada to get their fundraisers where they need to be!

Rada Cutlery’s fundraising website has all the information you need to get started! 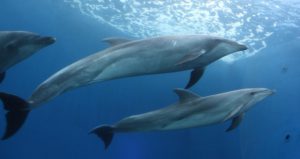 Dolphins are among the most beloved creatures on earth. These graceful aquatic mammals have captured the public’s imagination through demonstrations of their incredibly high intelligence and fascinating, complex personalities. Unfortunately, many dolphin species across the globe are threatened by hazards such as certain fishing methods and pollution.

The World Wildlife Fund (WWF) has a dolphin “adoption” program that allows individuals to help ensure these majestic creatures have a bright future. Visit their website to learn how you can adopt a dolphin for yourself or for a loved one!

Hi, I’m Chef Ted at the Rada Cutlery kitchen, and today I’m going to show you how to make a fruit arrangement. It’s great for parties, weddings, any type of reception or anything you want to do. We’re going to use a Rada Tomato Slicer, which works great for pineapple, too. We’re going to saw the bottom off, then follow the curvature around. Just kind of clip the outside dots off as you go. What I like to do is come around where the core is and cut down.

To do these, depending on how long the toothpicks or skewers are that you’re using, it depends on how thick you want to slice the fruit. I’m using shorter, pretty close to standard toothpicks so I’m going to do about 1/8 to ¼ inch slices. As you can see, the Rada Tomato Slicer has no problem cutting through that. Now I’m going to cut up a cantaloupe. It’s one of those things where most people have never washed the cantaloupe before you cut them. But you do want to wash the outside, because when the blade cuts through the core, anything on the peel will go through, and you don’t want any contaminants that might be on the rind going into the fruit. I just walk it around.

I’m going to cut it in half. Then I’m going to use the Rada Ice Cream Scoop. This is the optimum tool for seeding melons. Now I’m going to cut that cantaloupe up. The biggest problem when you’re doing something like this is you’re trying to make square pieces out of round fruit. I’m using the Rada Chef Knife and cutting them about 1/8 to ¼ inch thick. Now you’re going to do the same thing with the honeydew.

We’ll cut it in half, now. Get that Rada Ice Cream Scoop out, walk it around the outside. Once again, try to make square pieces out of round. Switch over and use the Rada Cook’s Knife. Right now we’re going to cut up some star fruit. They look exotic, but they’re actually from the USA. You just slice them and they already have a neat little shape. I’m using the Tomato Slicer.

When it comes to assembling your fruit display, you’ll take your toothpick with the little frill on top of it and put what you want on the outside on first. So basically you’re doing it in reverse order of what you’d think. So I go blueberry, star, melons, pineapple, and stick them in like so. We’ve been working on this a little bit so we’re going to do one of the fun things I like to do with fruit arrangements. Take a banana, cut it down a little bit like so using the Rada Peeling Paring Knife, it’s phenomenal. I’m going to take the tip of the knife and make a tiny “X” on the side and then balance it out with another one on this side.

You take mini chocolate chips and push them right into where you cut the X with the paring knife. Take the blueberry and put it right like that, decide on an angle, cut like so, and work it in wherever you want to put it. And there you have an easy fruit arrangement made with Rada Cutlery!