How to Make a Pumpkin Pie | Thanksgiving Pies 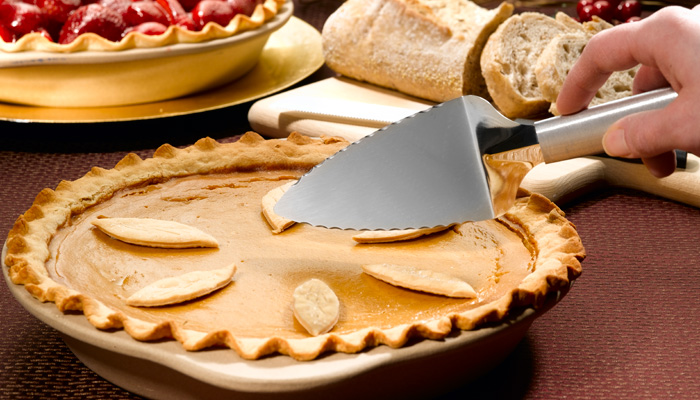 Thanksgiving is a time to give thanks with the people you love. So this year give them something they will make them really thankful – this pumpkin pie! Baking can seem like a scary task but we make the process as simple as possible and this pumpkin pie recipe can be made in 10 easy steps.

For this recipe we used a store bought pie crust.  But if you want to make the whole pie from scratch, you can use this simple pie crust recipe from the Rada Cutlery Blog. Scroll down to the bottom of the page for a video recipe.

We suggest you try using our Stoneware Pie Plate for this recipe. It allows even-heating while your pie is baking and leaves you with a flaky golden brown crust.

How to Make Homemade Pumpkin Pie

What you will need:

How to make pumpkin pie:

2. In a large bowl, mix together the pumpkin, sweetened condensed milk and egg yolks. Then stir in 1 teaspoon cinnamon, ginger, nutmeg and salt.

3. In a large glass or metal bowl, whip egg whites until soft peaks form.  A soft peak occurs when you lift the beater or utensil you are using out of the egg mixture the peaks curl over but still hold their shape. We used our Handi Stir to whip the eggs for our pie.

6. While the pie is baking you can begin preparing the streusel topping. In a small bowl combine the flour, brown sugar and 1 teaspoon of cinnamon. 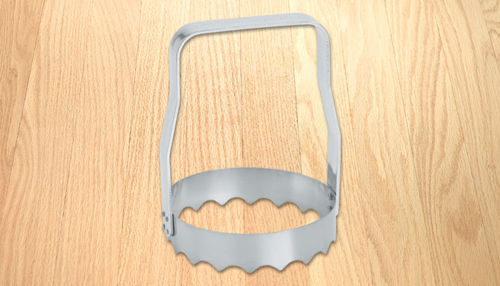 7. Cut in the cold butter with a fork or pastry blender until the mixture is crumbly. Cutting something in cooking terms means working a solid shortening, the butter, into a dry mixture. The Rada Cutlery Food Chopper works really well for this task.

8. Sprinkle the topping over the pie.

9. Reduce oven temperature to 350 degrees.  Bake for an additional 40 minutes or until the pie has set.

10. Allow the pie to cool then serve and enjoy. The Rada Cutlery Serrated Pie Server allows you to cut and serve the perfect pie slice everytime. 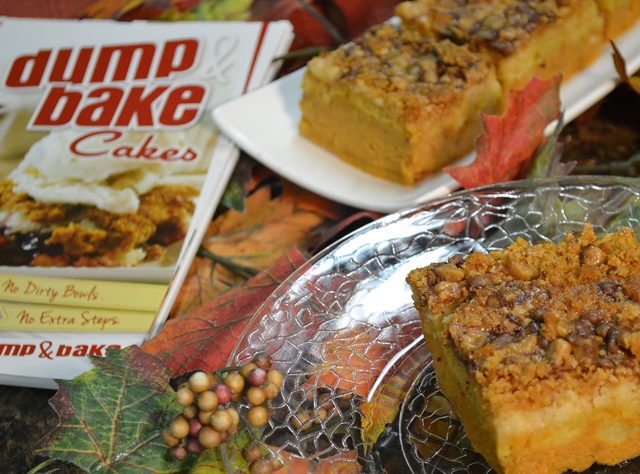 All the kitchen products we used for this Thanksgiving pie recipe and the cookbook the recipe was from can be found at the Rada Kitchen Store.

If you are looking for another Thanksgiving dessert recipe to serve, try our Not-So-Scary Scarecrow sugar cookies.

Rada Cutlery is the best fundraiser for nonprofit groups! Every year, tens of thousands of groups partner with Rada to raise money for good causes. Churches, clubs, schools, sports teams, civic organizations, and more make the money they need with a Rada fundraiser.

Download the Rada Cutlery EASY guide to learn more about why a Rada fundraiser is what’s best for your group!

Watch this video to learn how to make a pie crust from scratch in your own home:

Hi, Kristy in the Rada kitcen, and I’d like to share a recipe to make your own, made from scratch pie crust. This recipe will make a nine inch, two crust pie. It’s really simple, I know for years I was always scared to try it, and now I love making my own pie crust. It tastes a lot better too.

All you need are a few simple ingredients. For the two crust pie you’ll need two cups of leveled flour, that’s all-purpose flour. And to that, you’ll add one teaspoon of salt, and then just mix those two together. Now to this mixture, I’m going to add ¾ cup of shortening, I’m using Crisco shortening. And if you have a pastry blender, I’m going to use the Rada Food Chopper, it works just like a pastry blender. And you’re going to just mix that until you get chunks about the size of a pea. If you don’t have a pastry blender, or this food chopper, you can use two knives to mix it all in.

Now once you have that all mixed together, I’m going to add very cold water, five tablespoons, and I’m going to add one tablespoon at a time. I even added ice to the water; it seems to work better if it’s really cold water. So just drizzle that in there, and with a regular fork, you just start stirring. It should pretty much be forming, be sticking together and forming a ball. We’ve got one more to add. If it already is sticking well, you might not need the whole five tablespoons, it’s just kind of how you feel it is.

So now you can see how it’s all sticking pretty well together. So now I made it into a ball. Now this is a two crust pie, so you just break that in half. Alright, so now, the rolling out part. I like to have the counter just a little damp, because I’m going to use wax paper to roll it. And if you dampen the counter, it won’t slide around. So I put down two sheets, and put your dough ball in the middle. And then I’m going to put two more sheets over top. And then with the rolling pin, I like to roll one way… So you keep it round, you want to change directions with you rolling pin.

Then it’s good to have your pie plate ready, because you’ll want it to be bigger than your pie plate, So you have a nice crust edge.  So if you measure it and you see the crust past the pan, it’s big enough. I’m  using the Rada stoneware pie plate. So you don’t have to grease that, it makes the best pies. So then you peel off the top layer, and what I like about the wax paper is that you can pick the whole crust up. So then you just gently make sure that the crust gets all the way to the bottom. And then you can gently peel off the wax paper. I was a little short on the edge here, all you do is piece it in from the other edge.

If you’re making a one crust pie, you just would fold these under, and you could do a little edge with your finger, you could take a fork, make an edge. But I’m going to make a two, filled fruit pie, so I’m going to have another one that I’ll make out of here, and seal it in that.  That’s another video where I make a black raspberry pie.

Now if you want a baked, one crust pie, you want to poke at least 50 times with the fork, so when it bakes it doesn’t bubble up, it stays flat. So that’s the easy way to make a pie crust. Just try it, it’s really easy. And look for my other videos on more of my pies. 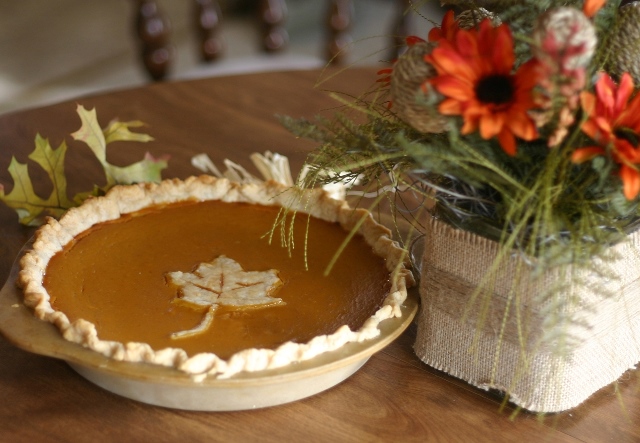