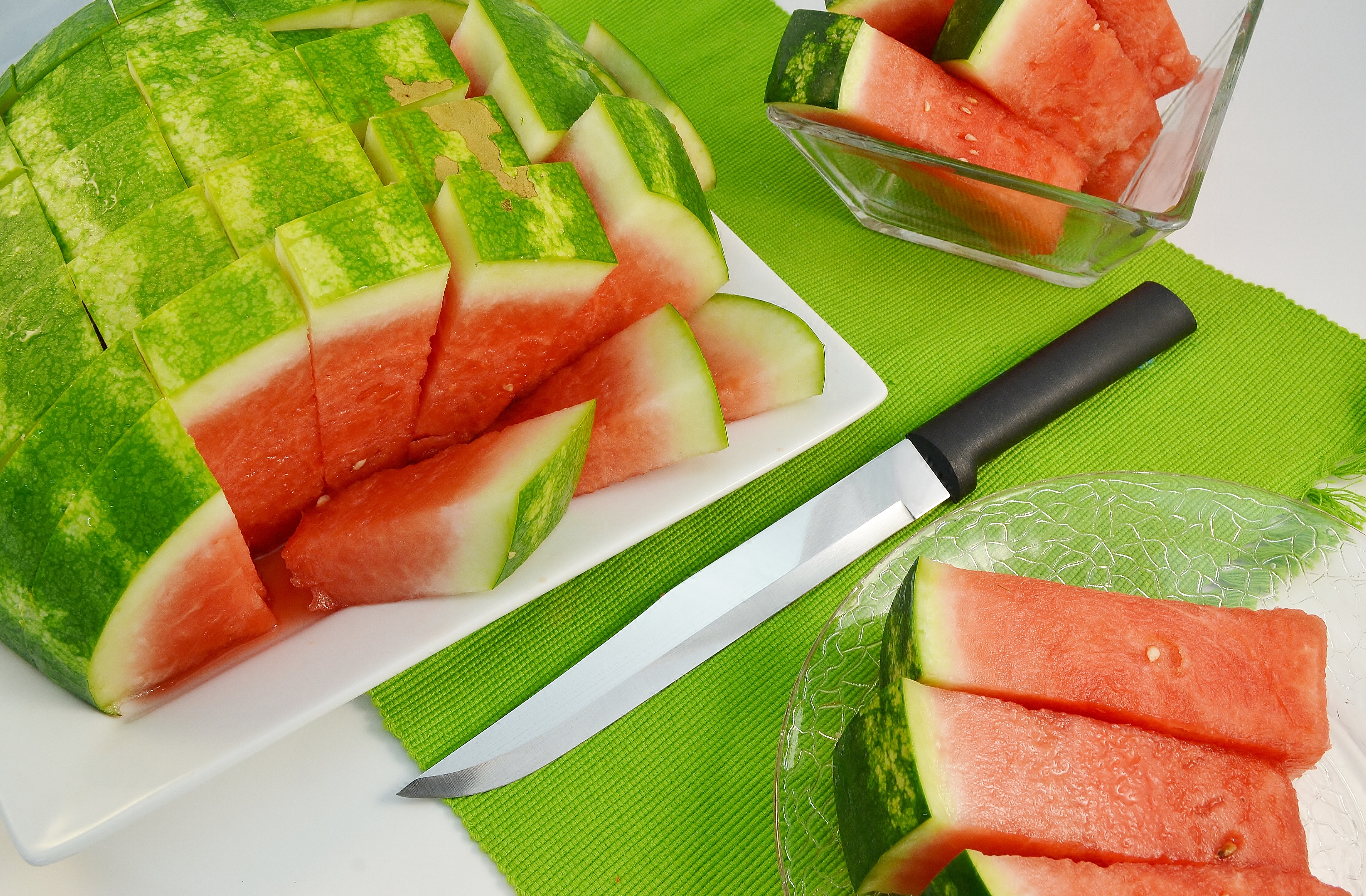 Do you find cutting up a watermelon intimidating? Do you ever cut part of a watermelon and then leave it in the fridge because you don’t want to go through the mess again? If the answer to either of these questions is “yes,” then this video will give you some good ideas for you to consider the next time you slice up watermelon!

Hi, my name is Dan Kielman with Rada Manufacturing and I’m here to share with you a strategy for using the Rada Cutlery Ham Slicer to cut up a watermelon. This is something I stumbled onto a couple of years ago. Everybody I shared this watermelon cutting strategy with has really liked it.

When I buy a watermelon, I like to get it cut up right away so it will get eaten! You can use this cutting method for the traditional watermelon wedges, but what I typically do is cut the watermelon into chunks that can be put in a bowl with other fruit for a fresh fruit salad or alone as cubed fresh watermelon.

So now to get started, I’ll cut the watermelon and fill up a fruit bowl that we can eat right away with a meal or put in the fridge. And the other half of watermelon will go into a storage container that can be eaten later on. Fresh watermelon makes a real nice treat for the kids when they come in from outside or as a snack.

Anyway, what I’m going to do is I am going to cut off both ends of the watermelon. And you will notice that I’m doing this by the sink. So what I’ll do is throw the rinds into the sink as I’m cutting it. And that way later on I can go ahead and collect it and put it in the garbage can – this helps minimize the mess.

So the next thing is to cut your watermelon into about three slices. Then I’ll go ahead and cut a wedge here. And you will notice how nice the Ham Slicer works. It is a nice, big, long knife. It goes through the whole circumference of the watermelon.

And once I have it cut, I’ll go ahead and slice it in half. I’ll put half of it off to the side. And the other half I am going to take and I will cut it away from the rind.

So I did the first half slicing the watermelon away from me. You want to be careful as the Ham Slicer is a very sharp knife. Notice how nicely it cuts away from there. And again I’ll come back cut off of little bit of the watermelon for a taste test.

There is some trimming that is needed but for the most part it does a good job. I got a little bit of white from the watermelon rind there so I will cut that off. And then you have a nice chunk of watermelon and I am going to cut this in three pieces. Turn it over and I am going to chunk it again. In three or whatever size you want. And I’ll come across here and look at the nice wedges you have. Nice little chunks. Great for either a fruit salad or as a side dish of watermelon. And you can slide it right from the cutting board into a fruit bowl.

Remember that we have only cut up just half of a third of this watermelon. So another couple halves and this will be full. And the rest of the cut watermelon can go into the container for later on use. And I did all this with the Ham Slicer – using the nice long blade that makes it easy to cut up this watermelon.

The nice thing about this watermelon cutting strategy is that it can be done all at one time. You take care of cleaning the mess once and your watermelon is ready to be eaten over the next two, three, four days. I suggest you give this a try. Use our Rada Cutlery Ham Slicer and a seedless watermelon and enjoy the treat!

If you don’t have a Ham Slicer handy, try the Rada Ice Cream Scoop! 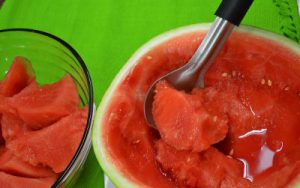 How to Pick a Watermelon

There are so many myths about picking a ripe watermelon. There’s the thumping and shaking techniques, but most experts agree the only way to know if you have a good watermelon is to cut it open and taste it. Since you can’t do that at a market or grocery store, try these tips: