Watermelon is a refreshing part of any meal, but sometimes it can be avoided because of the effort it takes to chop it up. It doesn’t have to be that way! check out this post to learn some unique and creative ways to make cutting a watermelon just a little bit easier. This post will have two different ways you can cut up your watermelon. 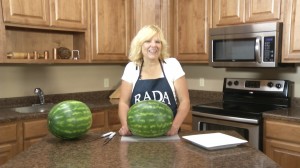 All you needs is some watermelon, a cutting board, and a knife. 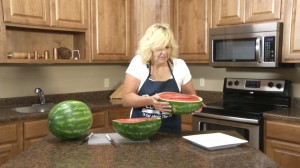 Now slice the watermelon into slices about one to two inches wide. 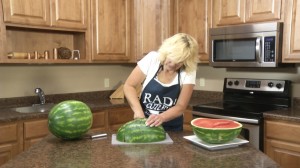 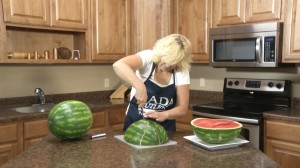 This should lead you to having watermelon “fingers” you can eat right off the rind! 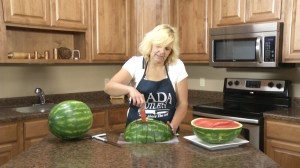 With your next watermelon, keep it whole. Slice the ends of the watermelon rind off. 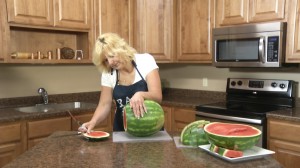 Now fillet the rest of the rind off. 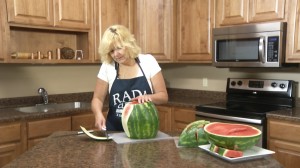 Once all the rind is chopped off you can choose to serve it whole. 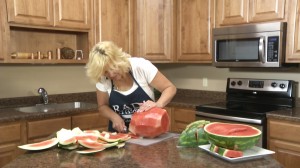 You can also continue to chop the watermelon up into smaller pieces! 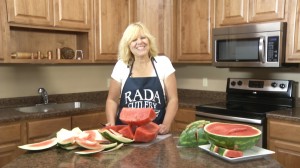 Check out the link below to see a delicious recipe for a Watermelon Smoothie. 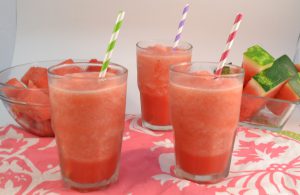 Go to the Rada Cutlery YouTube Channel to learn how to make a Watermelon Smoothie!

Rada Knives Used in this Recipe: 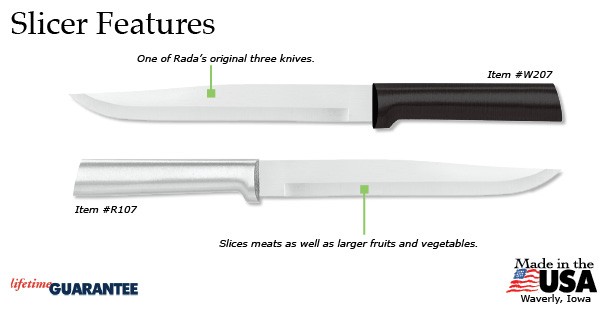 Our Slicer has been in production for over 60 years, it is a total classic! It is great for meats, fruit, vegetables, and more. 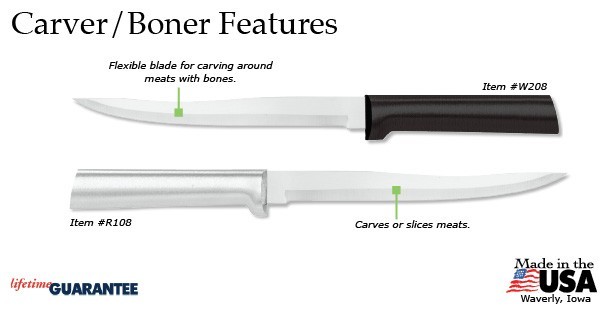 This Carving Knife is a sleek and flexible tool great for cutting anything from chickens to watermelon.

At Rada Cutlery, we proudly sell All-American Made Cutlery. Learn more about us here.

Video on the best way to cut watermelon:

Hi, Kristy in the Rada Kitchen and today I wanna show you a couple unique ways to cut up a watermelon and right here I have two kind of rounded watermelons, they’re seedless, so you don’t need to worry about cutting out the seeds.

On this first one what I’m gonna do is cut it in half length wise, I’m gonna use this Rada slicer. So I’m gonna pierce down and just cut straight down on half of it and I’m gonna go back and cut the other half. So start with your tip going down and then you slice straight down. The knife kind of does the work. So there’s half of it, now here’s a unique way to cut it into easy serving pieces, so we’re gonna make about one inch cuts, and actually this piece wont have a lot of watermelon on it, but I’ll show you when I get it cut.

Now this second watermelon maybe you have picky eaters that don’t like to eat it off the rind, we’re gonna take the rind of this one, I’m gonna use a more flexible knife, this is the carver/boner. It likes a fillet knife. And first you just want to cut the end of square. There is not much watermelon on that end piece anyway.

So it will sit flat like that, now were gonna do the other end. Looks like I went in maybe two inches. So now what were gonna do it more or less fillet the rind pf this watermelon. This knife has a really nice flexible blade so there I didn’t get all the war down, so you can just go back in and carve that off. And I’m gonna go through hand just trim off that. and if you wanted to get fancy, you could square it off, make it look like a cake, put some whipped topping on it and some fruit.

There’s a carved up watermelon, you could set out, let people carve off their iown slice. Or now you could go in and slice it into chunks. I have another video where I make a watermelon smoothie.