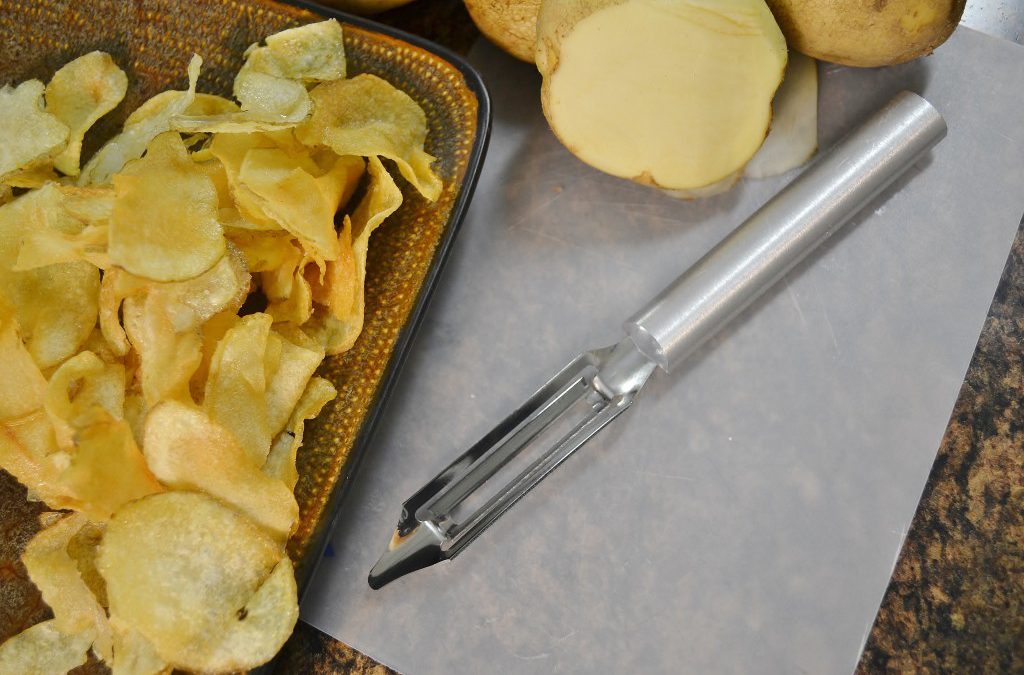 Forget expensive store-bought potato chips full of empty calories. Instead, make your own from scratch! These homemade potato chips are made from real potatoes right before your eyes.

*Learn about different techniques to slice and peel your potatoes in the video below! 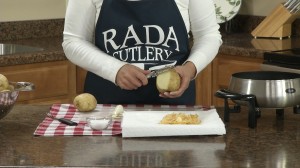 In a large heavy pan or in an electric skillet;  heat about 1/2 inch of vegetable oil, canola oil, grape seed oil, peanut oil or lard to about 350°F.

Scrub the potatoes clean. Slice potatoes with the Rada Deluxe Vegetable Peeler.  Place one at a time into hot oil in a single layer. 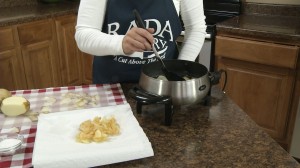 Fry the potato slices until they no longer “sizzle” and are golden brown, or as you like, about 3 minutes per batch.

Using a spoon with holes, transfer the potato chips to layers of paper towels. 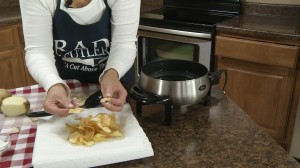 Let cool. Note: Hot chips will not be as crisp as cool chips.

Repeat frying the chips in batches until all the potato slices are cooked. 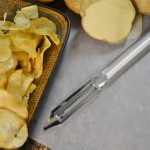 Forget expensive store-bought potato chips full of empty calories. Instead, make your own from scratch! These homemade potato chips are made from real potatoes right before your eyes. 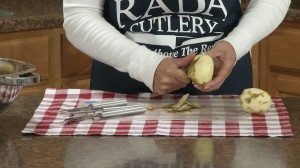 Did you know that the first potato chip was created in Saratoga Springs, New York? A cook at a lake house there was trying to please an unhappy customer by slicing his potatoes extra thin and sprinkling them with salt. When he fried them, they turned crisp. His customer loved them and they soon became a favorite. The name “Saratoga Chips” stuck with this American staple well into the 20th Century. 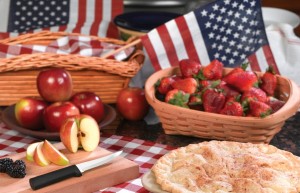 Did you know that Rada Knives, like the potato chip, are 100% American made?

Rada Cutlery was started in 1948 in Waverly, Iowa. Our knives are made from 100% American stainless steel and aluminum by hardworking American hands. Our quality products come with a lifetime guarantee, with no corners cut to bring you the very best items.

You can find Rada Cutlery items on our website as well as our Kitchen Store. 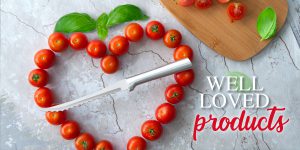 For over 70 years, Rada Cutlery has been the partner of choice for nonprofit groups across America! Groups that fundraise with Rada can offer supporters Rada’s vast lineup of unbeatable kitchen products, with each sale earning an incredible 40% profit. And starting a Rada Cutlery fundraiser is easy!

Check out our fundraising catalog to learn more about Rada fundraisers! 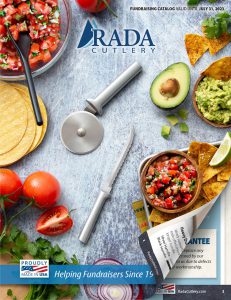 How to Peel Potatoes

Learn about the different ways you can peel a potato. You can peel with a Vegetable Peeler or a Paring Knife.

How to Make Homemade Potato Chips

Hi, Kristy in the Rada kitchen, and I’d like to show you several techniques of peeling a potato. Rada offers a vegetable peeler, and it can be used on the down stroke, or some people like to pull it towards them. This blade is sharpened on both sides, so a right handed user can use it as well as a left handed user.

We also offer a Deluxe Peeler for those extra-large potatoes, maybe those larger fruits and vegetables like zucchinis. Again, it works really slick, you can go both ways, it’s sharpened on both sides.

And some people prefer a paring knife. Again, you can go towards you. Probably one advantage of the paring knife is you won’t have to use another knife to slice it up if you’re making mashed potatoes.

Then we came out with what we call a Granny Paring Knife, and this fits the circumference of the potato or the apple. Again, it’s really easy; you can get really thin slices. It’s a real good delicate garnishing knife. It works really well.

So that’s several of the knives and utensils that we offer to peel your potatoes.

Hi, Kristy in the Rada kitchen and today I’d like to show you how to make homemade potato chips. They’re really crispy and they’re healthy because we’re going to use sea salts to season them. But we had a customer ask if you could use the Deluxe Peeler to make potato chips, and yes you can. It also works great to peel kernels off a cob of corn, or peel carrots or large fruits and vegetables.

So what you’ll need is, I have a pan here, it’s an electric pan, and I have oil. I just use regular vegetable oil, and I have it heated to about 325. And you just simply, I like to leave the peels on, you might want to peel just the outer part to get it going. And you just simply peel off slices. And you want to make contact with the potato on the whole blade to get a nice piece.

If you’re worried about your fingers, I found if you take our Rada Granny Fork, you can use it as a holder and it will hold the potato and you don’t have to worry about your fingers. You might have to turn the potato, the trick is to get that nice, flat edge. Now I might start on this side. It does work best to lay the potato against your work surface. So now I’m going to start frying them. The trick to make them crispy is, don’t let them stick together in the fryer. So I individually place them in the hot oil. Again, it’s about 325 degrees. They will curl a little bit while you cook so you can keep adding them. And you’ll cook them until they quit making that frying noise, they’ll just kind of float in there. And then you’ll know they’re done.

So you might want to flip them maybe once or twice. If they’ve been in there a minute or two they might be easier to flip without them sticking together. Now the peeler works great on these because it makes them really thin slices, and that’s going to make a really crispy potato chip. So now you can see they’re not cooking as hard as they were when we first put them in, and the edge is starting to get a little golden brown, they’re done!

You can remove them and let them drain on a paper towel, and I like to sprinkle them with sea salt, you could use a season salt too. This non-scratch spoon, it’s a Rada spoon it has drainage holes, it works great! Because this is a Teflon pan, it’s a non-scratch pan, plus it drains the grease.

Now we have them on the plate, I’m just going to take some sea salt, and we can tell they’re already crispy, delicious potato chips.

Crispy potato chips, one of the unique ways to use our Rada Deluxe Peeler. If you have a question about one of our products, or you have a suggestion about how you use it as a specialty item, let us know by giving us a call at 1-800-311-9691 or leave us a message in our email.