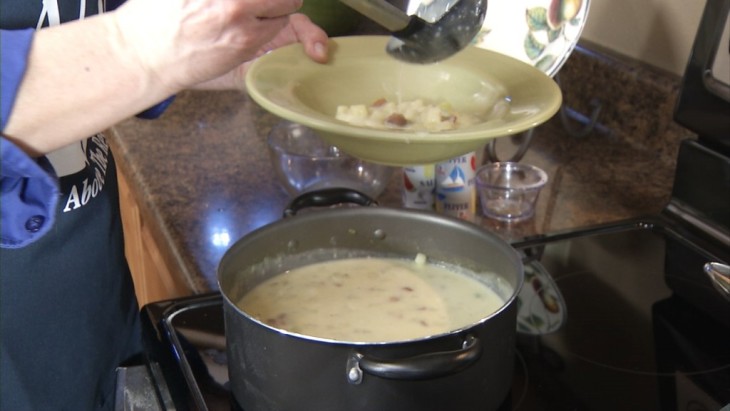 This recipe for Creamy Ham & Potato Soup will please the whole family. It is not difficult to make so you won’t mind when they ask you to do so over and over! 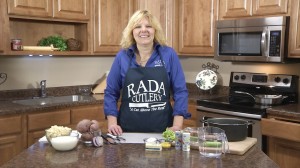 1. Peel & cut potatoes. Try using the Rada Vegetable Peeler. Then dice your potato with a Paring Knife. Also, try leaving some skin on the potato–that’s where the nutrients are.

2. Cut & Dice your remaining ingredients as listed in the ingredients above. You might try the Rada Food Chopper for this step.

3. Put all diced ingredients into a pot and then add water. 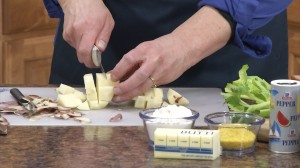 4. Bring water to a boil then reduce heat and let simmer for 15 minutes, or until potatoes are tender (err on the side of slightly under-cooked). Use the Non-Scratch Spoon if you have a non-scratch pot.

5. In another sauce pan, set to medium heat. Then melt butter and stir in flour, stirring constantly until it’s thick (about a minute). Try using the Rada Handi-Stir for this step. You will love how the angle of the head is perfect for gently stirring the flour as it cooks at the bottom of the pan. 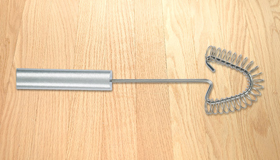 6. Slowly stir in milk as to keep from creating lumps (this is the creamy white sauce that will give your potato soup a wonderful full texture). Stir for 4-5 minutes over medium heat until it thickens.

8. Add the white sauce to the potatoes and other ingredients with your spoon. Mix thoroughly. Serve with a Non-Scratch Soup Ladle. 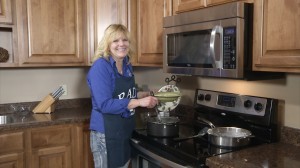 2. Did you know that soup is a good palate cleanser? If you’re serving a meal that includes multiple courses, try using soup somewhere in between. A cold soup is especially good for palate cleansing.

3. Reduce your fat content in your soup by making the day before, chilling and scraping away the fat that rises to the top.

4. Careful with your herbs. They will give your soup a more intense flavor if added at the end of the cooking process.

5. If a hot soup ends up too salty, toss a potato in the soup. Allow it to sit for fifteen minutes then remove. It will take the extra salt taste with it!

6. Consider using stock or broth instead of water to steam, boil, poach, make soup, or braise. It will add flavor to whichever dish you’re preparing. Water doesn’t taste like anything. Make your dishes more exciting by tossing in something flavored.

7. When making soup in a slow cooker, place longer-cooking ingredients at the bottom. Meats and root veggies will take longer to cook than ingredients such as cauliflower. Place them at the bottom so they can absorb more heat.

Did you know that nonprofit groups have been fundraising with Rada Cutlery since 1948? It’s true! Last year 19,000 groups including churches, schools, clubs, teams and youth groups made a 40% profit selling Rada Knives and our other Made-in-the-USA kitchen products for their fundraiser.

First I’m going to peel and dice the potatoes using the Rada vegetable peeler, which is super sharp. The little end can get out the eyes or any imperfections. You know what, I like leaving a little bit of peeling on my potatoes. That’s where all the nutrients are, are in the peeling. I think it makes it prettier too in the soup.

Alright, so once you have it peeled, I’m going to dice it with one of my favorite super-paring knives. Now this is how I dice potatoes. I’m not a professional chef, I’m just an Iowa farm girl. I slice them like that, then I turn them. I suppose you would call this Julianne. Then I cut them again. What you have are little diced potatoes.

I’m going to use my flexible cutting board, it’s easy to get the product in the bowl. I’ve already gone and did it, so we have about 3 1/2 cups of the diced potatoes. Then we need 1/3 cup diced celery.

This I’m going to use the Rada cook’s knife. After I cut it that way, i just go back and chop a little bit more. You could measure this, I usually just guess. It looks like about 1/3 cup to me. You’re going to put that in the pot with your potatoes.

Then you need 1/3 cup finely chopped onion. Again, I’m going to use my cook’s knife.

Now i’m going to finely chop this. You just use a rocking motion, keep the tip of the knife down. Now I’m going to add this to the pot.

Now to this pan, we are going to add the water. That was 3 1/4 cups. Now we’re ready to put it on the stove. We’re going to bring this to a boil an then we’re going to simmer it for about 10 to 15 minutes or until the potatoes are tender.

This is the Rada non-scratch spoon. I do have a non-scratch pan here. it’s really nice, it won’t scratch off the coating. You’re going to bring this to a boil, then reduce the heat and let it simmer for about 10 or 15 minutes or until the potatoes are tender.

Now that the butter is melted, I’m going to stir in the flour with my Rada whisk. I do a little bit at a time, you don’t want it to get all lumpy. This is how you make a white sauce too, if you ever need a white sauce for a recipe.

You’re going to stir the flour and butter, stir it constantly until it’s thick – for about a minute. Now I’m going to add the milk. You want to slowly stir it in as you keep stirring it so you don’t get lumps. You’re going to keep stirring the milk-butter-flour mixture for about 4 or 5 minutes over medium heat until it starts to thicken.

Now you’re ready to add the white sauce. You’re just going to pour that in. The spoon is flat on the bottom so it’s easy to get into the corners. Once you add the white sauce and stir it in, it’s done and ready to serve. This is a fast easy meal, and I used up my leftover ham. Your family will love this creamy. rich potato soup. Check out the recipe at our Rada Cutlery blog.