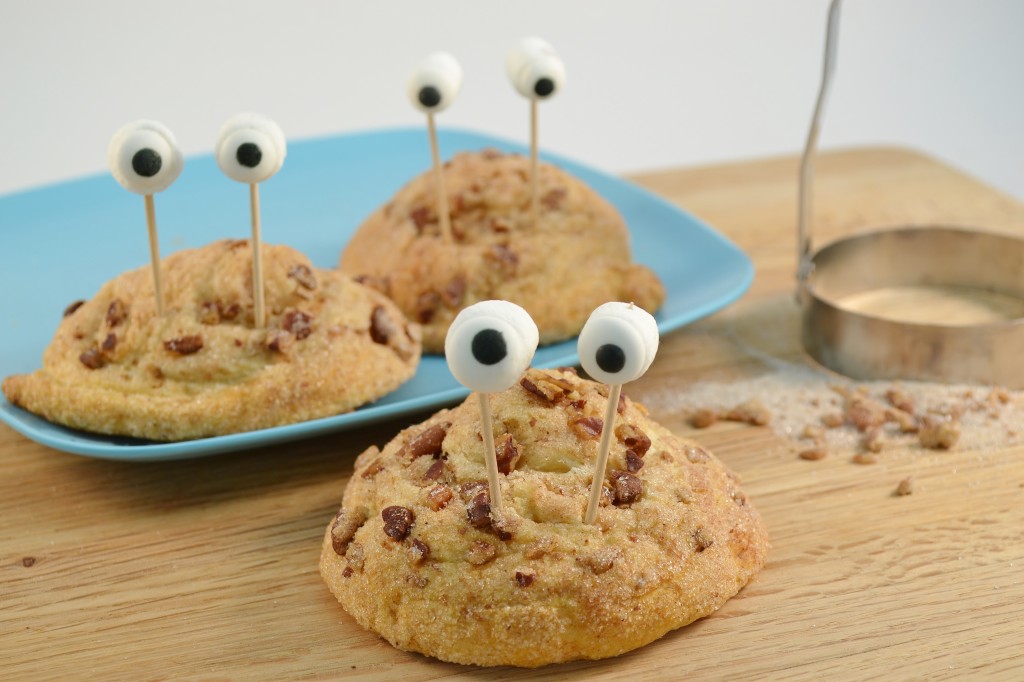 Cinnamon Snails Recipe | Why You Should Cook With Your Kids

Try this fun to make recipe with your little helper/s! This is a nice and easy recipe to start out with your kids, and tastes delicious, too! Read to the end to learn why having your little ones cook with you can be very important.

Start out by chopping up some nuts of your choice. Kristy, and her little helper Ellie used the Rada Food Chopper, which make chopping tasks quick and easy! 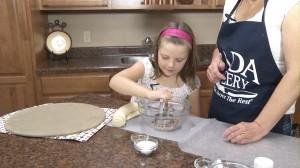 Add the sugar and cinnamon to the chopped nuts and mix well. Make sure you are letting your little one help out! 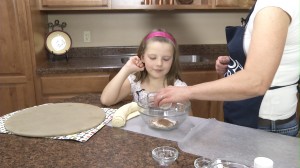 Spread out the mixture onto a cutting board. grab some of your dough and roll it up the way you would with a cinnamon roll, but use a rolling pin to flatten it out over the mixture. Continue doing this until all the dough is gone and put in a preheated oven at 375 degrees for 15 minutes or so. 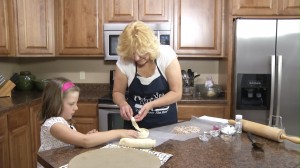 Grab a mini marshmallow and a candy eye. “Glue” them together and poke the marshmallow onto a toothpick. 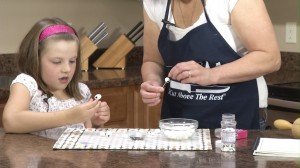 Remove the snails from the oven and put the eyes on! 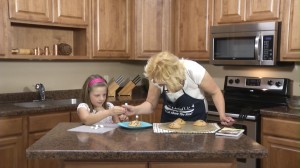 You are now ready to go! All the cinnamon snails should be complete and you’ve been able to have a fun time in the kitchen with little helpers.

Try this fun to make recipe with your little helper's! This is a nice and easy recipe to start out with your kids, and tastes delicious, too!

Why You Should Cook With Your Kids 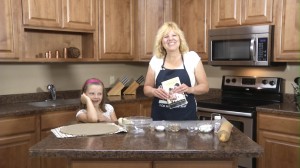 About.com’s food section has a great article titled Top Ten Reasons to Get Kids Cooking. They list 10 reasons why it is good to get you little ones cooking with you. We’ve listed them below, but click the link below to see the full explanations! 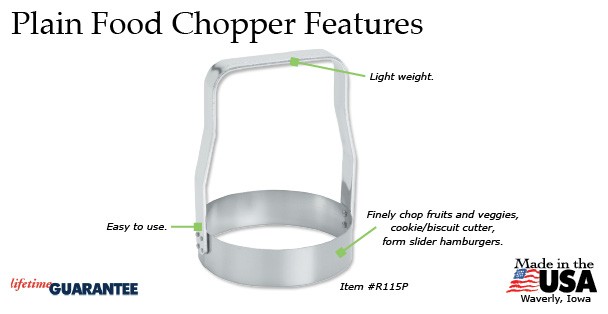 Our Rada Food Chopper makes chopping food take no time at all! It is easy to use and lightweight, so chopping is made easy!

Rada Cutlery products are 100% American Made – from raw materials through construction. Rada Mfg. Co. is able to continue our Made in the USA manufacturing because our committed employees strive each day to ensure efficiency and eliminate waste. This is done at every stage – manufacturing, packaging, order-processing and shipping.

Learn more about Rada Cutlery by clicking on this link.

Hi Kristy in the Rada kitchen and today I have a little helper. Her name is Ellie. She is going to help me make a recipe out of this cookbook called “Mommy and Me.” It’s full of over 100 hundred recipes of appetizers, main dishes, and desserts. It has instruction for what mommy does and what your little helper does. Great for grandkids, even your dad and you could make some of these.

Ellie is six years old. This is a great time to get kids to start helping in the kitchen. If they need to use a knife, they can use a butter knife so they don’t get cut. Today we are going to make cinnamon snails. Who’s a snail you can think of?

So I think we’ll make them like that, we’ll add some little eyes. The first thing we need to do is chop up some pecans. So Ellie if you want to, pour these nuts in that bowl. Do you like to cook with your mom and dad?

So this is a Rada food chopper. Safe for kids to use, not super sharp, but sharp enough to chop some nuts. So f you want o go like this and get those nuts chopped up. It’s great to chop up celery, I just made some ham, we made some ham and cheddar crescents. That’s about a ¼ of cup of nuts, any kind. Now we’re going to add three tablespoons of sugar. And a half a teaspoon of cinnamon, let me grab a spoon, you can mix that together. Have your dad help you make these and surprise your mom on Mother’s Day, make these for breakfast.

Now we’re going to put this on a sheet of wax paper. So we put our nuts and sugar and cinnamon on this wax paper, kind of spread it out. Now you’re going to take one of these 8 ounce rolls of breadstick dough, so Ellie if you just want to unroll that. Now just roll it up tight, like a snail. And then you take another one and roll that one around it. Oh unroll it, because we’re going to wrap it around the other one. So unroll it all the way and wrap it around there, there you go you can do it. Now we’re going to plop it on here and with a rolling pin we’re going to roll it out, just kind of flatten it out to about an eight of an inch. Now pick it up and put it on our packing sheet with the sugar side up.

So now we are going to put this in a preheated 375 degree oven for about 5 minutes and while those are baking were are going to make cute little eyes to make them look like Gary the snail.

So to make our cinnamon snails really cute, we’re going to make these  little eyeballs and what it is a miniature marshmallow and these candy eyes I bought at the store, and some toothpicks and a little bit of water.

So Ellie if you want to take a marshmallow and then take one of the candy eyes and ten put a little drop of water on your finger on the back of the eye and that will stick it to the marshmallow.

Yeah, very good! So we’ll wait for our snails to get done, then we’ll stick them in there and they’ll really look like snails! So now our cinnamon snails are ready to eat. We might want to let let them cool a little bit, but lets put those eyes on there and show them how cute it is. We’ll put one there, see.

That was fun to cook, wasn’t it? And that was one of the recipes in this cookbook “For Mommy and Me” 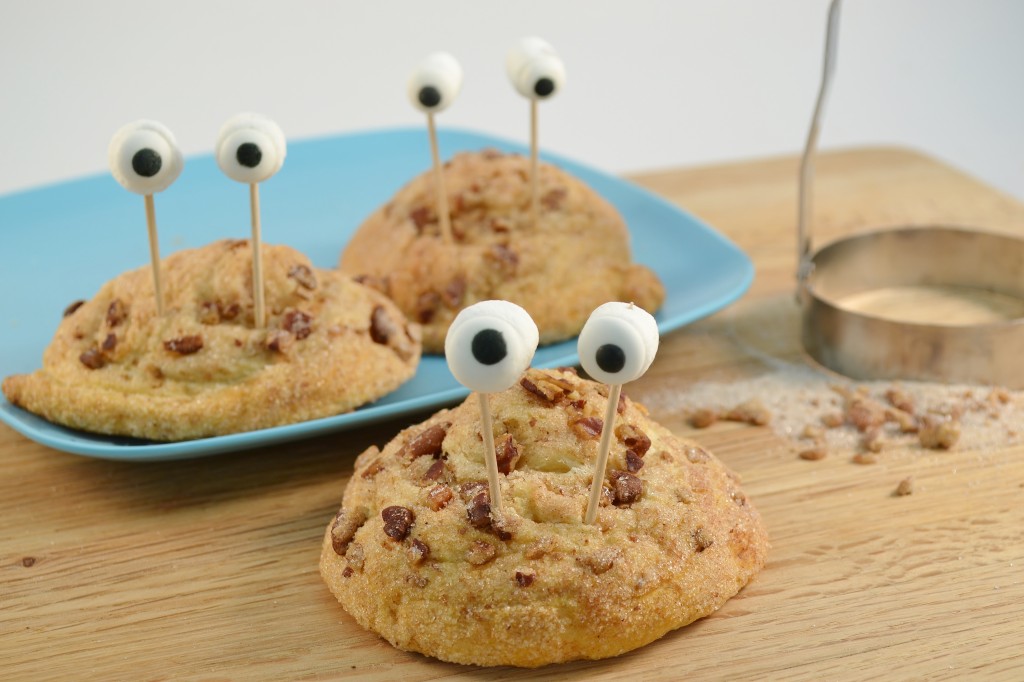