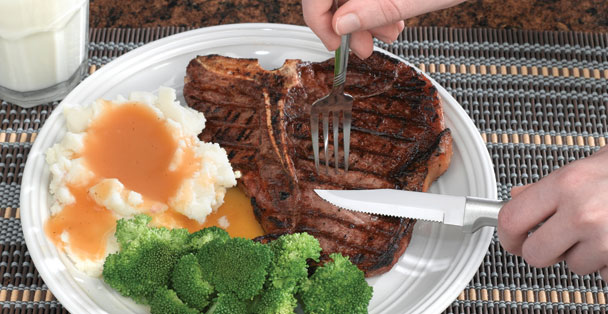 Cuts of Beef: A Culinary Lesson | Chef Blake in the Rada Kitchen

Do you ever wonder what part of the cow is the source for roasts, steaks or meat cuts?  With Chef Blake’s help, we have lessons on the different cuts of beef.  Check out the Cuts of Beef chart that Chef Blake has made in the following lesson, complete with a video.

Watch Chef Blake’s lesson about the different cuts of beef. This knowledge will be helpful next time you head to the supermarket or butcher to pick up some steaks or even hamburger.

Learn a little more about the beef industry with some facts below!

Rada is located in the northeast corner of Iowa in Waverly. Iowa has a lot of farms and a lot of cows! Here are some fun facts about the cattle industry in the Hawkeye State:

All of these facts can be located on iabeef.org. 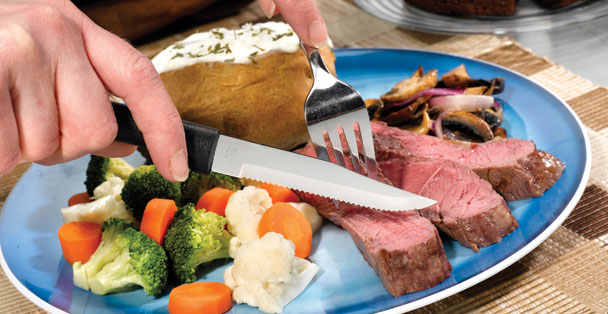 One of Rada Cutlery’s most popular knives is the Serrated Steak Knife. The serrated teeth of the steak knife provide you a smooth saw cutting action! It is an excellent knife to cut up any meat you might be cooking with, whether it’s beef, pork, or chicken. You can find more information about the serrated steak knife here.

Click here or on the catalog photo below to check out our fundraising catalog!

Here we have our cow that we drew out and broke down into segments and the different cuts of meat in this cow. We’ll start here with the round. The round is the back part of the cow. We have the bottom, the rump, the tip, the top, and the eye. This one in particular is good for more roasting.

The sirloin has the top butt, the bottom butt and the tri-tip. One of the more popular items in the past years has been the tri-tip. It’s harder to find around here where we’re at, but generally this is the area. You can get some steaks out of that, they’re on the leaner side and inexpensive, but not my favorite cut of meat for steaks.

Down on the rib, we have the small end, the large end, the ribeye and the baby-back ribs. The ribeye is my favorite part of the meat. It has more fat and some tender parts. Slow roasting it, making prime rib is my favorite.

We have a big chunk and as you can see here, a lot can come out of that particular area. When I purchase burger meat, I generally use this area, because I know that it came from this specific part of the cow.

Down here we have the flank. The flank steak is becoming more popular. Cut it against the grain and you can grill that up, marinade it, many different things.

The plate—a couple popular steaks have been taken off of here from the restaurant. Hangars and skirts, you can use those many different ways, a lot of times being marinaded.

The shank which also has a lot of my favorite parts, a lot of times gets looked past. You can use it in soups and stews because it has the bone. That can give a lot of flavor to whatever you’re using it with. If you were to just take a piece of shank, throw it on the grill, it’d likely be very tough, hard to eat, so braising is a recommendation for that.

The brisket is a lot of times smoked, it’s real tough. So go low and slow for a long time to tenderize that. The innards, obviously you can use for a long time.

USDA has certification classifications that allow you to find out the quality. We put the best at the top. Prime is the best, but you’re going to pay for it. So choice is second in line for USDA certification. That is what you’ll be able to find at the nicer grocery market. You can request it at the butcher. I recommend that. Select is lower end, you get a discount. And the no-roll is not even graded.

So to kind of give an idea of the difference is between each of them and the way that they are is that it’s fattened. If there isn’t much fat, it’s a lower quality. The more, the better. So you’ll be able to see just by picking up a steak, the lines of fat that go through there, the better the quality. I personally like choice. There’s more bang for your buck. They have a brand out there, Certified Angus Beef, and they charge more for that, but that’s the higher more quality 2/3 of the choice.

The way that the USDA certification works is more or less a conveyor belt. They have a gun that they scan over the meat and it reads how much fat is in the meat and that’s how they get their certification. If one cow is broken down, parts of it could be prime quality; parts of it could be select. The radar, more or less the gun, will define it and define if it’s prime or choice. Prime is more expensive because it’s harder to come by. The more fat in their food and diet that they eat, the more fat is in their meat. But the more food they feed them, the more expensive the cow becomes and the higher cost of the meat overall.