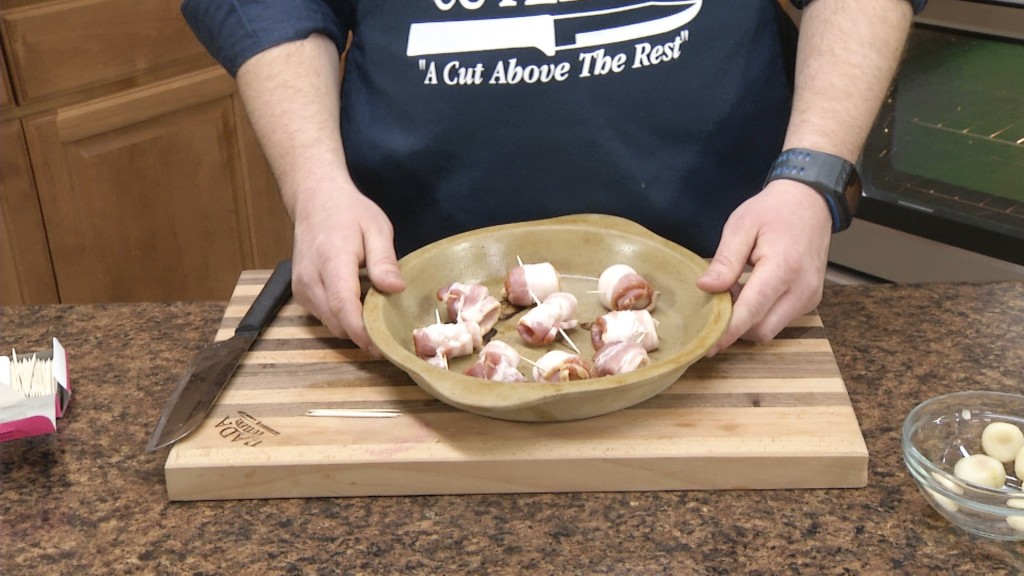 Look no further for the perfect appetizer for your next party or get-together. These Bacon-Wrapped Water Chestnuts have a sweet and salty, Asian-inspired kick that will delight your friends and family! 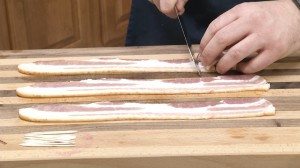 Place bacon-wrapped water chestnuts into pan. The Rada Pie Plate is ideal for this, as it evenly distributes heat. Place in oven preheated to 425 degrees, where they will cook for 18 minutes. Halfway through the cooking process, remove the pan, flip the Bacon-Wrapped Water Chestnuts, and place back into heat. 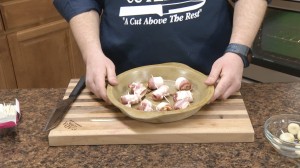 If desired, soak scallions in ice water. Remove from ice water and then slice off white part of scallions. Slice green part finely. 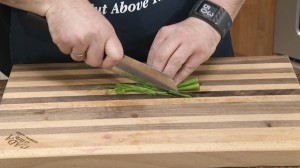 When bacon-wrapped water chestnuts are completed, add scallions, or, if desired, a teriyaki sauce. 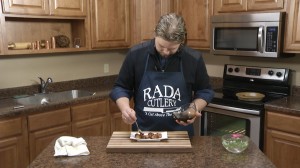 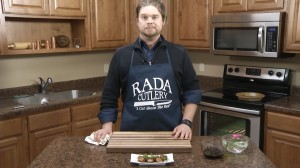 A Pie Plate That’s Not Just For Pie! 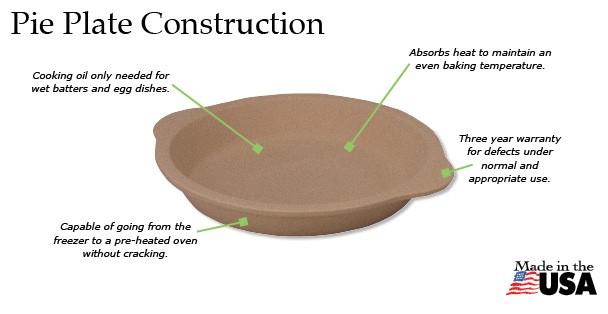 The Rada Pie Plate is your best option for baking pies, appetizers, and more! Made from stone, not metal, this dish absorbs heat for an even baking experience. It only needs cooking oil for wet batters and egg dishes, and is capable of going from the freezer to a pre-heated oven without cracking. It’s 100% made in the USA, and, unlike most stoneware, is dishwasher safe!

A Knife Fit for a Cook 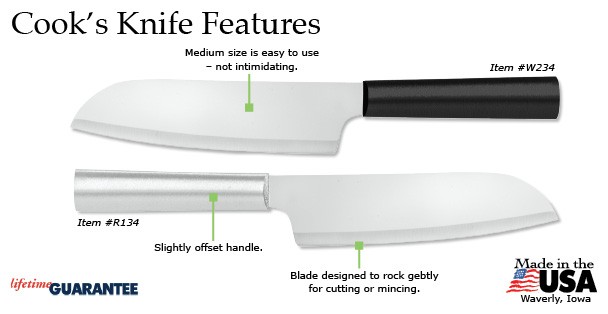 The Rada Cook’s Knife is a home cook’s best friend! Its medium size gives it unparalleled versatility while remaining easy to use.

Make Your Own Teriyaki Sauce! 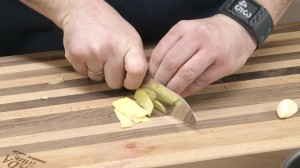 You don’t have to go to the grocery store or an Asian restaurant to get teriyaki sauce. Watch this fun video for easy instructions on how to make your own delicious teriyaki sauce! 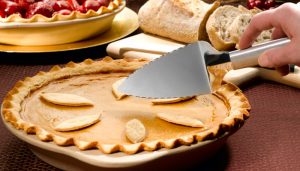 Rada Cutlery is not only America’s premier kitchen product company, but also its most effective fundraiser!

If you or someone you know has a worthy cause in need of precious funds, fundraising with Rada Cutlery is the way to go. Whether you’re involved with a nonprofit organization such as a church or charity, need funds for a school trip, or have a community group that does good locally, Rada Cutlery is there to help.

Groups that fundraise with Rada can offer the company’s lineup of amazing kitchen products, items that are not only a great value, but that people actually want and use. Each sale makes a stellar 40% profit for your cause, so every bit of effort goes extra far!

Check out our fundraising catalog to learn more about Rada fundraising!

Check out the Rada Cutlery EASY guide to learn more about why a Rada fundraiser is your group’s best fundraising option!

Thanks for visiting the Rada Cutlery Blog! Don’t for a second think that the fun stops here; we’re easily accessible across a wide range of social media platforms. Make sure to follow us so that you’ll be the first to know about recipes, special announcements, and more!

We’ve got some whole water chestnuts, which you can find canned. I got these in the Asian section of the grocery. You can find them fresh rarely, but canned ones are pretty good. We’ve got some thick cut bacon, this is nine pieces per pound, which is pretty thick, but I like it like that, that’s how I buy my bacon, it’s the only way to do it.

What we’ll do is take the water chestnut, lay it down, wrap it up, cut the bacon, skewer it up, and then we’re going to put it in a dish. We have our oven preheated to about 500 degrees and we’ll let those go for 20, 25 minutes or so.

So I put my bacon out, you can run your finger across it or spread it out with your knife. This kind of gives it a little bit more length or so. You put the water chestnut on there, there’s not much science to this, wrap it up, and then I cut it with the knife, grab one of the toothpicks, try to get through the meat, not the fat, stab it straight through, put it on the pan. Kind of twist as you go through the chestnut. They do break, but if you wrap them good enough, they’ll hold, no matter what. I’m going to use the rest of the bacon.

Alright, I got them equally spaced apart. There’s a thin layer of bacon fat at the bottom fo the pan. We’re going to throw them in the oven, in a really hot oven, it’s going to take a while for them to cook. In a convection I usually go at 425, since this is conventional we’ll go higher to 500 just because you want to get that nice browning on that bacon.

So we have some scallions, or green onions, here, I had them sitting in some ice water, and it’s amazing how much that just crisps them up. So it’s important to crisp them up, get them nice and solid. We’re going with the green parts, because the white parts we put in the teriyaki sauce. Just to utilize these green parts, this is going to be our garnish. We’ve got our little scallions here, and what I try to do is find our thicker pieces, make sure they’re crisp, and I start pinching them together until you can stack them. Lay them flat on the board, kind of press them, like so, and you take a really sharp knife. Try to go as long on the cut as possible. They call this a Chinese cut sometimes. We’re going to put them in some ice water and they’re going to curl up a bit, a nice little garnish on top of these, or really, for anything.

Alright, throw away the scraps, because you want them all looking perfect and beautiful, like so, stick them in some ice water, let those chill for a little bit, hopefully they curl up nice and pretty. Alright, now our bacon water chestnuts are finishes, so we’re going to take these out of the oven, nice and toasty. About halfway through the cooking I flipped them over, just to let them brown a little bit on the other side. After I pull them out of the oven, I’m going to flip them back over, just kind of let them rest for a little bit.

We can pull these skewers out and plate them up. Now, there’s something important that you should make sure you pay attention to when you’re purchasing the toothpicks for these. Don’t get the mint ones. Make sure you get the unscented ones. We purchased these very simple and basic Diamond toothpicks, nice and round, I didn’t want the squares because I twist when I pull the toothpick out. The squares would probably damage it a little bit more.

Before I pull it off, I just twist it, then I try to pull it out there. So we’ve got 6 on the plate here, filling our plate up just fine. So they’re delicious how they are, but we have this homemade teriyaki sauce, I’m just going to take a little spoonful and lightly drizzle it over the top. It’s got some scallions in the ginger and garlic in there. We have these scallion curls that we used the top parts of the scallions. Cut them fine, about a 16th of an inch wide, and we’re just going to lay these right on top. Since we have a teriyaki sauce, we can also garnish it with some pineapple or other things, like sesame seeds for some color, but we’re just going to keep it simple here.

So, it’s a nice appetizer, really simple, easy to hold. Voila! There’s a little Bacwache. Give us some feedback, let us know what you think about it, and thank you for watching!