Since 1919, the American Legion Auxiliary has been America’s premier women’s service group. Based in Indianapolis, Indiana, the ALA consists of nearly 800,000 members dedicated to supporting veterans and their families.

A variety of American Legion fundraisers can be held to raise money for veterans, but a Rada Cutlery fundraiser is easy to setup and very profitable. As an added bonus, all Rada products are 100% Made in the USA which means American Legion supporters will love buying them!

Soon after, many women’s organizations made clear their desire to become affiliated with the Legion. Such groups had put their full support behind the troops when the war was ongoing. Now that the war was over, they retained their desire to help the nation’s brave fighting men. Thus, the American Legion Auxiliary began. The group has been supporting American troops and their families ever since.

The ALA sponsors programs that achieve a staggering variety of purposes. Their efforts fund scholarships, job training, entertaining functions, advocate for veterans at all levels of government, and much more.

The American Legion Auxiliary can be found online!

Of course, all of the ALA’s helpful activities require funding. Raising money, even for causes as noble as those supported by the ALA, can be a challenge. Thankfully, that’s what Rada Cutlery is here for!

Why Choose a Rada Fundraiser?

A Rada Cutlery fundraiser is the perfect way to raise money for American Legion Auxiliary groups and their programs. Here’s why!

When partnering with Rada, your group has three different fundraising methods at its disposal, ensuring that your group maximizes its potential. Fundraise with catalogs, at events, or through our internet fundraising – orders placed on our website with your login information to give your group the profits from the purchases!

Most fundraisers offer groups a razor-thin profit margin, as low as 10%. But with Rada, you make an amazing 40% fundraising profit on each and every sale, meaning that every bit of effort goes as far as possible!

Rada Cutlery’s fundraising catalog has something for everyone. Whether it’s our renowned cooking knives, unbeatable kitchen utensils, fabulous cookbooks, or amazing stoneware, your supporters will love what they get and probably even beg for more! Click here to browse some of our most popular products! 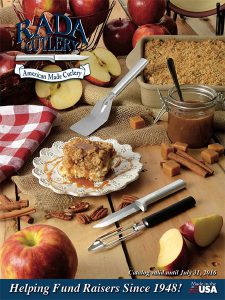 Rada Cutlery’s knowledgeable, friendly staff are happy to help you every step of the way. Just give us a call at 1-800-311-9691, or contact us through our website below!

All of Rada Cutlery’s products, without exception, are Made in the USA. Our employees take pride in their work, and it shows in the form of superior cutlery, kitchen utensils, and more. Visit our website to learn more about how our employees’ skill and dedication make Rada the best you can buy!

Get the Fundraiser Started! 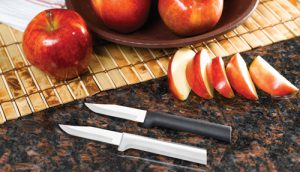 Tens of thousands of nonprofit groups meet and exceed their financial goals each year with Rada Cutlery. This includes the American Legion and associated organizations.

“Currently we only have one income source to fund our legion and I see a great need for a new fundraising idea,” wrote one American Legion supporter in Illinois. “I own several of your knives and am very happy with them so I thought of your company for a fundraiser!”

“I have some of the knives and love them,” said another from Ohio. “We would like to do a fundraiser for our organization to help veterans!”

“I heard you have great knives,” wrote an American Legion Auxillary supporter from Virginia. “We are looking for a new fundraiser for our club and decided to use Rada.”

Starting a Rada fundraiser is easy. Just contact Rada Cutlery to request your Free Fundraising Information Packet to get up and running!

Who Was the Last American World War I Vet? 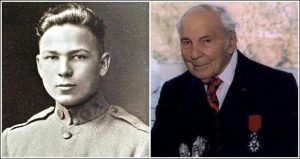 Sadly, the last of America’s World War I veterans passed away in 2011. That man was 110-year-old Frank Buckles, who served in the 1st Fort Riley Casual Detachment.

Born in Bethany, Missouri, Buckles worked as an ambulance and motorcycle driver at ages 16 and 17. He served in France, where he tended to the many casualties that resulted from ferocious fighting. His experiences in the war moved him deeply. Later, during World War II, the Japanese held him as a civilian POW in the Philippines.

In 2009, Buckles testified before Congress, making him the oldest person to ever do so. He spoke in favor of a World War I memorial in Washington, D.C., for which he was a passionate advocate

Buckles was famous for his war service, and often gave interviews about his experiences. An accomplished man, Buckles was fluent in German, Spanish, Portuguese, and French. He continued traveling and farming well into his later years.

Buckles died of natural causes on February 27, 2011, the last of a generation of American heroes. He was buried in Arlington National Cemetery with full military honors.

Learn more about the life of Frank Buckles at Wikipedia!